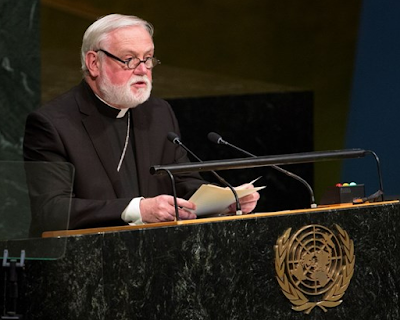 The highest ranking Prelate at the UN, Archbishop Paul Richard Gallagher, has admitted that the ecumenical movement is not about an "internal Christian affair", or bringing back separated Christians into the One Fold of Jesus Christ, the Catholic Church.

No, the ecumenical movement is a horizontal, secular, globalist, political movement focused on the "pressing needs of humanity". Are these needs sin, evil, broken families, sexual perversion, abortion, homosexuality....?

No, the "needs of humanity" are secular, political, humanistic. 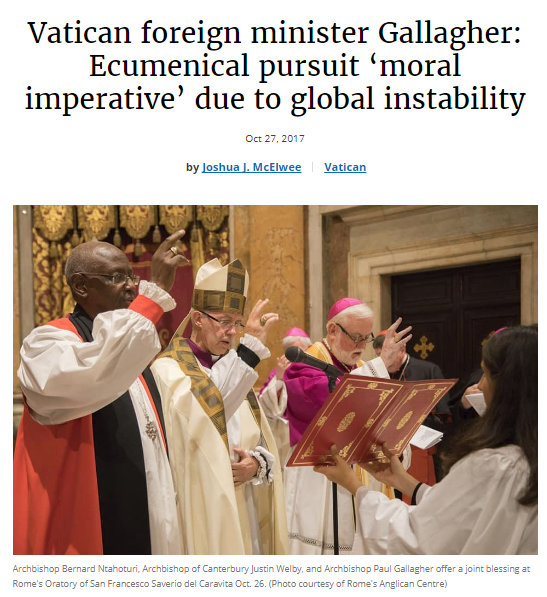 In a speech recently given, the Archbishop wants to "put people first.." Notice, not Our Lord Jesus Christ! I ask you, dear readers to recall the words of Our Lord: "come to me all ye who labour, and I shall give you rest..." Now, consider the following agenda of the Archbishop:

From the news agency Zenit, which, incidentally, highly approves of the Archbishops' stance:

“Putting people always first means protecting, at every stage and in every circumstance, the dignity of the person, and its human rights and fundamental freedoms, and in a specific way, the rights to life and to freedom of religion from which all other rights flow and which are therefore the common foundation of the pillars of peace and security and integral human development,” Archbishop Paul Gallagher

In conjunction with these fundamental rights, he commented on several areas of special interest to the Holy See:
Sustainable Development:  “With the 2030 Agenda for Sustainable Development and the Paris Agreement on Climate Change, the international community committed itself to effective measures to eradicate the root causes of various evils and indignities that many people in the world today are facing.”
Care for our Common Home:  “This call for responsible stewardship finds particular urgency before the deteriorating conditions of our common home and an often purely utilitarian worldview concerning the things that surround us.”
Preventive Diplomacy and Responsibility to Protect:  “The duty to prevent wars and violent conflicts is an essential component of the Responsibility to Protect.”
Migrants and Refugees:  “Our common humanity impels us all, as Pope Francis has proposed, to welcome, to protect, to promote and to integrate those who flee from such adverse conditions.”
Trafficking in Persons:  “At the heart of this evil, however, is the utter loss of respect for human dignity and the total indifference to the sufferings of fellow human beings.”
Nuclear Disarmament:  “Without greater international and regional cooperation, especially among weapons-producing States, to control and limit strictly the production and movement of weapons, a world free of wars and violent conflicts will surely remain an illusion.”


You will notice that, for the Archbishop, the "right to life" and "freedom of religion" is the foundation of "peace, security .... integral human development". Not one word of Our Lord Jesus Christ upon which everything is built.

Contrast the worldly delusions of this Prelate to the holy words of Pope Leo XIII, from Tametsi:


The most important duty of the Church, and the one most peculiarly her own, is to defend and to propagate throughout the world the Kingdom of the Son of God, and to bring all men to salvation by communicating to them the divine benefits, so much so that her power and authority are chiefly exercised in this one work.

What kind of life that is from which Jesus Christ, "the power of God and the wisdom of God," is excluded; what kind of morality and what manner of death are its consequences, can be clearly learnt from the example of nations deprived of the light of Christianity. If we but recall St. Paul's description (Romans I., 24-32) of the mental blindness, the natural depravity, the monstrous superstitions and lusts of such peoples, our minds will be filled with horror and pity.

Gallagher is a traitor and a rebel. He is a malefactor. The ills he speaks of are due to sin and turning away from the Gospels. Instead of proclaiming Christ, Gallagher preaches a false masonic humanism. Judge dear friends for yourselves if his words are reflective of Pope Leo's. But let there be no doubt: the policy of the Holy See at the United Nations is substantially Judeo-Masonic. The Holy See policy is not one of preaching Christ Crucified, but a false horizontal "Christianity" bereft of the Cross.

Let us hear the words of the great Pope Leo XIII again, laying out the true charter for Catholic action amongst the nations:

As with individuals, so with nations. These, too, must necessarily tend to ruin if they go astray from "The Way." The Son of God, the Creator and Redeemer of mankind, is King and Lord of the earth, and holds supreme dominion over men, both individually and collectively. "And He gave Him power, and glory, and a kingdom: and all peoples, tribes, and tongues shall serve Him" (Daniel VII., 14). "I am appointed King by Him . . . I will give Thee the Gentiles for Thy inheritance, and the uttermost parts of the earth for Thy possession" (Psalm II., 6, 8).

Therefore the law of Christ ought to prevail in human society and be the guide and teacher of public as well as of private life. Since this is so by divine decree, and no man may with impunity contravene it, it is an evil thing for the common weal wherever Christianity does not hold the place that belongs to it.

When Jesus Christ is absent, human reason fails, being bereft of its chief protection and light, and the very end is lost sight of, for which, under God's providence, human society has been built up. This end is the obtaining by the members of society of natural good through the aid of civil unity, though always in harmony with the perfect and eternal good which is above nature. But when men's minds are clouded, both rulers and ruled go astray, for they have no safe line to follow nor end to aim at.

He is not even trying to be Catholic, and still - who will call him out on this, if the pope himself is no different? Te stage has been set. Those who would call these heretics out, are to be perceived an anti-humanity and anti-peace. What will they do with us?

They're building a 'counter church...the ape of the Church'; the one that +Fulton Sheen warned about.

". . . The third temptation in which Satan asked Christ to adore him and all the kingdoms of the world would be His, will become the temptation to have a new religion without a Cross, a liturgy without a world to come, a religion to destroy a religion, or a politics which is a religion — one that renders unto Caesar even the things that are God’s.

In the midst of all his seeming love for humanity and his glib talk of freedom and equality, he will have one great secret which he will tell to no one: he will not believe in God. Because his religion will be brotherhood without the fatherhood of God, he will deceive even the elect. He will set up a counterchurch which will be the ape of the Church, because he, the Devil, is the ape of God. It will have all the notes and characteristics of the Church, but in reverse and emptied of its divine content. It will be a mystical body of the Antichrist that will in all externals resemble the mystical body of Christ. . . "

What will they do with us? Well, at first they will imprison us, because we will be criminals in their eyes. (white martyrdom) and then will come the red.

They are moving right along in the destruction of the Church of Christ, at lightening speed. It will quickly become the Church of Satan. In the Office of Divine Worship in Rome, they have been working for some time on the 'New Ecumenical Mass' where Transubstantiation plays no part. Andrea Grillo, which is said to be the ringleader in this initiative (oh and hates Cardinal Sarah btw) and a 'lay liturgist' to what I have read, has said that 'Transubstantiation is not DOGMA' so it looks like they are planning to neuter the Mass completely. We will be in the Catacombs before too long.

We are witnessing what happens when faith in Christ and his mission has been lost and replaced with a political mission focused on Man.

We must stand as Knights with JESUS CHRIST as CHRIST Himself requested of us, no matter what the cost. For the sake of our Eternal Souls, we must obey CHRIST over the Evil & Corrupt False teachings of Fallen clergy, as they will drag the brainwashed faithful to Hell. We must stand firm with CHRIST'S TRUE HOLY ROMAN CATHOLIC, VATICAN I CHURCH. Old school traditions are correct, over the False, Leftist ways of Satanic break-away., Occult New World Church. CHRIST IS THE ONE & ONLY WAY TO THE FATHER. Everything else is a Satanic False Abomination. Without surrender to JESUS CHRIST, the only destination is Hell Fire.

How so true. God help us.