OECTA continues to support deviant sexuality ~ where are the parents, priests and the bishops?

The Ontario English Catholic Teachers Association (OECTA), is a strident, militantly secular union that should not be permitted to use the word "Catholic", in its name. Well known for the promotion of dissent against the Faith (e.g. priestesses etc.), OECTA continues, as it has for decades, to corrupt children in Faith and morals. 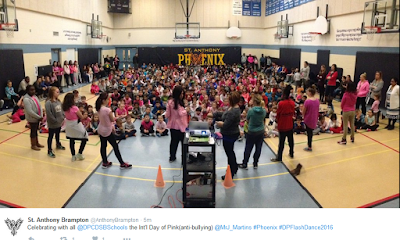 Are there no real Catholic teachers left, who will stand up to the tyranny of OECTA? Or, is the Union so totalitarian in its grasp and intimidation of teachers, that it has cowed those follow Christ and His Church  into silence?

That is one consideration.

What of the parents? Are there no parents who are disturbed by the evils that OECTA creates in its ideological incubator, the classroom? 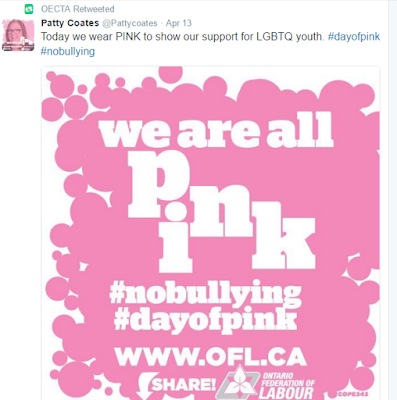 But there is another consideration.

What of the priests? Are there no priests willing to stand up for the Truth?

Were there no priests, for example, in the Dufferin Peel District ready to say, "no" to the gender ideology of the "Day of Pink" that was forced on our Catholic children?

Are these the same priests who signed the parishioner in good standing forms when these dissidents were looking for a job in the Catholic school system?

But what of the bishops?

Ultimate oversight of the Catholic schools is the responsibility of the bishops. Cardinal Collins may only have nominal oversight, but he does have the canonical authority to strip OECTA of its use of the word "Catholic". He does have the pulpit in which he and his auxiliaries can speak out against gender ideology, against the corruption of our youth.
Posted by Barona at 10:12

As a Catholic Religion teacher in an Ontario Catholic school who is faithful to the magisterium in the classroom and beyond (I do regularly go to Confession), I keep my eyes down, and go about my duties, frequently to the delight of my students and the consternation of colleagues, parents and administrators. There are now SO FEW parents, parish priests and bishops who dare to profess the faith from the pulpit. Even the holy father seems ashamed of the teaching of Christ. I know all about my union. We few remaining orthodox teachers are in the classroom doing all we can. Please look for some good news too.