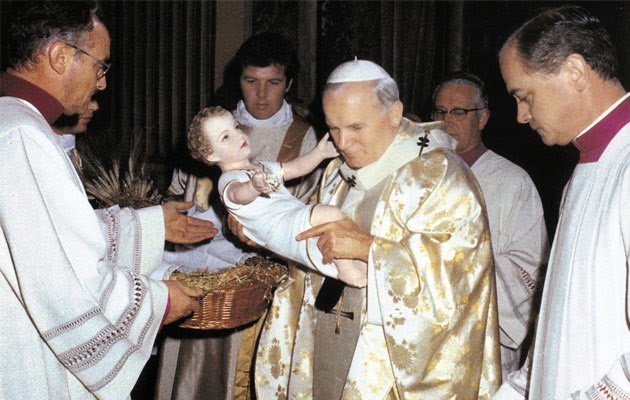 It may be well worth our while to re-study Familiaris Consortio, the constant reference point for faithful Catholics regarding the indissolubility of marriage. A further report in the next few days will carry strong words from a number of Polish bishops on this subject; words that were publicly spoken during the various Christmas Vigil Masses.

Contrary to the distortions that the Exhortation is "outdated" and needs "updating", in fact, Familiaris Consortio is more urgent than ever. Outdated? Just consider these words, they could have been written yesterday:


At a moment of history in which the family is the object of numerous forces that seek to destroy it or in some way to deform it, and aware that the well-being of society and her own good are intimately tied to the good of the family, the Church perceives in a more urgent and compelling way her mission of proclaiming to all people the plan of God for marriage and the family...


To all those who, in our times, consider it too difficult, or indeed impossible, to be bound to one person for the whole of life, and to those caught up in a culture that rejects the indissolubility of marriage and openly mocks the commitment of spouses to fidelity, it is necessary to reconfirm the good news of the definitive nature of that conjugal love that has in Christ its foundation and strength.


Now, we move closer to that irksome doctrine, that the innovators are trying to overturn as "outdated". Consider these words, before we re-read the doctrinal condemnation a priori of the innovators:


The Eucharist is the very source of Christian marriage. The Eucharistic Sacrifice, in fact, represents Christ's covenant of love with the Church, sealed with His blood on the Cross. In this sacrifice of the New and Eternal Covenant, Christian spouses encounter the source from which their own marriage covenant flows, is interiorly structured and continuously renewed...


Thus marriage is indissoluble based on Eucharistic theology. Now, our sainted Pope finally reiterates what the Church and everywhere and always taught; the unchanging and unchangeable doctrine, and binding on Popes as well as the simplest layman:


However, the Church reaffirms her practice, which is based upon Sacred Scripture, of not admitting to Eucharistic Communion divorced persons who have remarried. They are unable to be admitted thereto from the fact that their state and condition of life objectively contradict that union of love between Christ and the Church which is signified and effected by the Eucharist. Besides this, there is another special pastoral reason: if these people were admitted to the Eucharist, the faithful would be led into error and confusion regarding the Church's teaching about the indissolubility of marriage.

Reconciliation in the sacrament of Penance which would open the way to the Eucharist, can only be granted to those who, repenting of having broken the sign of the Covenant and of fidelity to Christ, are sincerely ready to undertake a way of life that is no longer in contradiction to the indissolubility of marriage. This means, in practice, that when, for serious reasons, such as for example the children's upbringing, a man and a woman cannot satisfy the obligation to separate, they "take on themselves the duty to live in complete continence, that is, by abstinence from the acts proper to married couples."
Posted by Barona at 13:30

Pope Bergoglio does not agree.

To Vox Cantoris' comment, concur.
*
I always say that Pope Francis and the innovators can't get past the great and saintly Pope. FC is a mere 35 years ago and the Church does not even have to go to antiquity to rebut and rebuke AL.