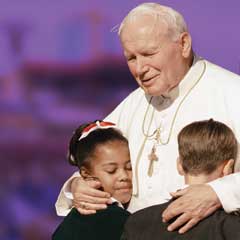 The "conservative" Canadian commentator, Charles Adler, recently said that opposition to contraception was thinking out of the 16th century, instead of what it really is: a pro-death 20th century ideology. His comment was bizarre for three main reasons. Firstly, it placed truth within history/time (a Hegelian concept; c.f. An Introduction to Christianity, Ratzinger); secondly, the entire Christian world until the Lambeth conference of 1930 opposed contraception as a grave moral evil: thirdly, it reveals the extent of societal decay, in which so-called “conservatives” hold moral and life issues that a few decades ago would be unthinkable. An American example is the so-called "conservative" Sean Hannity's support for contraception. Pope John Paul II placed the root cause of such confusion to a “corruption of the idea and the experience of freedom... an autonomous power of self-affirmation...the absence in people's hearts of God...” (c.f. Familiaris consortio).

Labels such as "conservative" or "liberal" are unhelpful. These two words have, and continue to change.  For example, Adler – a man who prides himself on his “conservatism” - not only advocates capitalism, but philosophically aligns himself with the ideology of Ayn Rand. Contrast Rand's advocacy of selfishness and individualism detached from truth and focused on personal perception of reality (really a form of autonomous self-affirmation), with the words of the Council Fathers : “In reality it is only in the mystery of the Word made flesh that the mystery of man truly becomes clear” (Gaudium et Spes, 22). The philosophy of Rand's selfishness can be best expressed by Fr. Ratzinger (1970) as “verum quia faciendum” , a “...changing the world, moulding the world... “ (p.35), a “...devotion to reality in so far as it is capable of being shaped” (p. 36). Ironically capitalism and Marxism both fall into the trap of reducing “the meaning of man completely into the practicable” (p. 42).

The consequence is that “truth” is abandoned for practical knowledge (cf. Ratzinger, p. 42), freedom is detached from truth and made subordinate to personal liberty/freedom (c.f. Veritatis spendor No. 99).  Hence, socio-economic and socio-political systems that are not rooted in the truth of the Gospels, due to a false anthropology, deny the authentic freedom of the person and will lead to totalitarianism. We see the  great Pope's prophecy of this being fulfilled before our very eyes. Nearly imperceptibly, we are sliding into a State imposed totalitarianism of moral relativism. 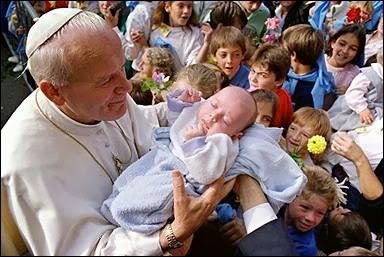 In contrast, it was the Pope's devotion to the philosophy of being, to St. Thomas Aquinas, that confused a media and world that was devoted to ideologies of meaning that were self-made. Daily, he would confound them. On one day, the Pope's words and actions would be "extreme conservatism", "reactionary" etc. - ah yes, the Pope had spoken out against abortion; or, decried the evils of contraception. This man was "anti-woman"!! Or, the following day he might be labeled a "pacifist" “pro-Arab” for having rejected the 2nd Gulf War (if only people had listened!!). Even some devout Catholics, such as George Weigel, blundered badly through indulgence in “conservative" politics by trying to justify both Gulf Wars. Weigel claimed that the Pope's “prophetic” position was more due to the failure of the United States to invade Iraq in 1991 than the Pope's analysis (Weigel, p. 622-624). In hindsight, the 2nd War confirmed the Pope's “prophecies” in full. Finally, the Pope has on many occasions spoken out in favour of the poor.... a "socialist" sympathizer, perhaps? Economically "naive" at least. Here again, the Pope has been proven correct with the 2008 economic crisis confirming the Church's assessment of capitalism. And so it went, both "conservative" and "liberal" confused and in error about our saint.

Pope John Paul never had an ideology, he "had a "Person": "Christ Jesus and him crucified". He saw people and the world through the prism of the Gospels. He saw the mystery of man through the mystery of the Word. In Memory and Identity he wrote: “ if we wish to speak rationally about good and evil, we have to return to Saint Thomas Aquinas, that is, to the philosophy of being” (p. 13).

Yet, with each passing day, with the coming demographic dark-age, with the ongoing economic crises, with the mushrooming of pornography, with the collapse of the family, with war and violence, with the explosion of sexual deviance... the Pope is being proved right and the "conservatives" and "liberals" proved wrong. If the world seems to have gone mad, it is because it refuses to conform itself to Christ the Redeemer.

Fiscal conservatives masquerading as social conservatives... morality be damned, make sure the mutual funds and RRSPs are safe! As for Ayn Rand... any philosopher that lets the Wall Street crowd feel good about themselves can't be good.

In Poland, the dialectic actually played out historically in geography. The Germans and Russians represented two strands of Bolshevism -- both gone mad. That madness infects our "conservatism" and "liberalism" in the West. It can only lead to the same genocidal catastrophe.