The subversion of the Papacy of Pope Benedict XVI 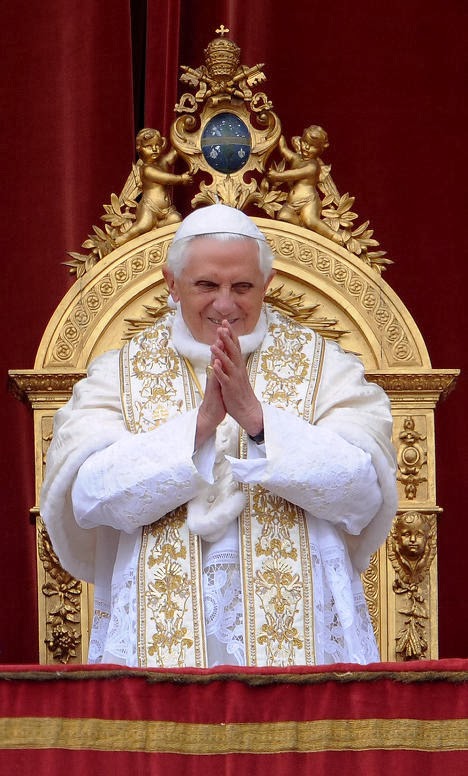 According to Fr. Thomas Rosica, "they" dressed His Holiness, Pope Benedict XVI, in an outdated sartorial manner; imposing attire on an unwilling Pope; such  rainment not reflecting the "theologian". "They" - these anonymous conspirators - were subverting the Pope. Presumably, "they" are also behind the new style of dress by Pope Francis? Or, have "they" been removed? Perhaps it is not too much to ask Fr. Thomas Rosica to furnish us with their names? After all, if there is some dark and conspiratorial clique in Rome, he has a moral obligation before God and the Church to expose them. Names please!

Alas, we shall never be provided with such names.To the contrary, Pope Benedict's manner of dress and his liturgical sense were reflections of his drive to return the Church to Her tradition. His externals were reflective of his internal intent. Even the secular Guardian - no friend of the Catholic Church - could understand this. Benedict's desire to recapture the Church's traditional liturgy and doctrine goes hand in hand with what he wore as pope. On his election in 2005, he wore Ming the Merciless-style vestments left over from John Paul's administration, and after getting rid of his first master of ceremonies, Piero Marini, who had subjected him to a sort of blue dust-sheet for his first papal mass in Austria, he turned to Guido Marini (no relation) – an MC who understood the power of tradition

Somehow "they" were able to force the Pope to dress as "they" wished; but, according to Fr. Rosica, the Pope's teachings still shone through. Teachings, Rosica informs us, he supports. But does he really? It is one thing, to accuse people, without names and proof, of subverting the Pope; presumably "they" are Pelegians. But it is far, far more serious to claim obeisance and admiration for the Pope's teaching, when all the while dissenting from that Pope, and indeed the Church. 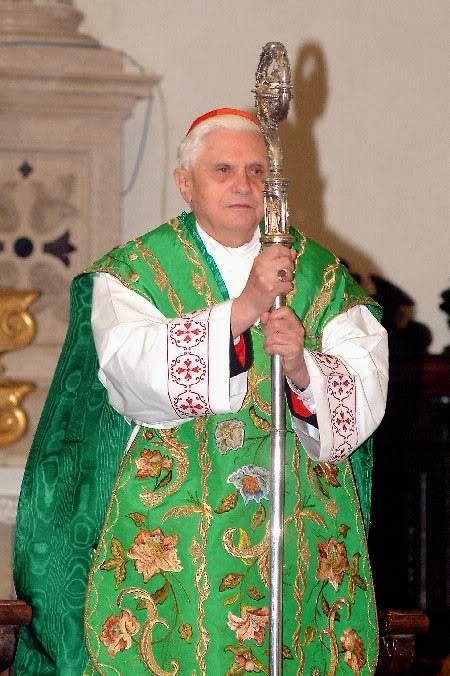 Fr. Rosica does make a very valid point in his speech. He is most correct in his call for us to remember the teachings of Pope Benedict; what he said. I agree. And in this same spirit, I think it is also appropriate that, we too, remember important words spoken by Fr. Rosica. After all, he is a somewhat prominent priest, and works part-time under Fr. Lombardi. 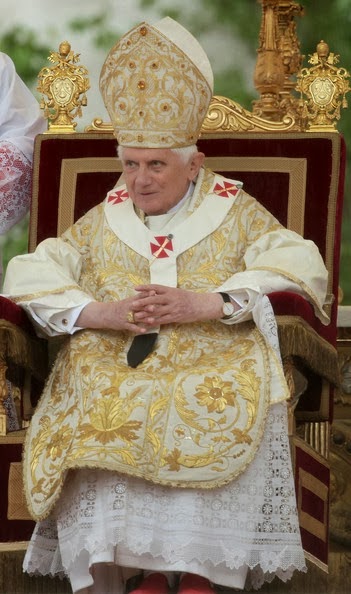 "I've certainly admired very much your theology, your writings; but also your love of the Church, your love of Christ, and you help to keep alive - not only the spirit of the Second Vatican Council - but the authentic teaching of the Council".

Now, let us consider the words of Pope Benedict from the Chrism Mass of 2012 on the issue of dissent:

Recently a group of priests from a European country issued a summons to disobedience, and at the same time gave concrete examples of the forms this disobedience might take, even to the point of disregarding definitive decisions of the Church’s Magisterium, such as the question of women’s ordination, for which Blessed Pope John Paul II stated irrevocably that the Church has received no authority from the Lord. Is disobedience a path of renewal for the Church"?

Not to be forgotten are Pope John Paul's words from Familiaris consortio: ...husbands and wives should first of all recognize clearly the teaching of Humanae vitae as indicating the norm for the exercise of their sexuality, and that they should endeavor to establish the conditions necessary for observing that norm.

With his support of Baum, does Fr. Rosica uphold the teachings of Pope Benedict, of the Church?  No. Gregory Baum is not a "model of hope"; his theology is certainly not to be admired....

But, let Pope Francis have the last word. Let us see what the Supreme Pontiff has to say about his venerable and much loved predecessor. On March 15th, Pope Francis spoke these words to the College of Cardinals: 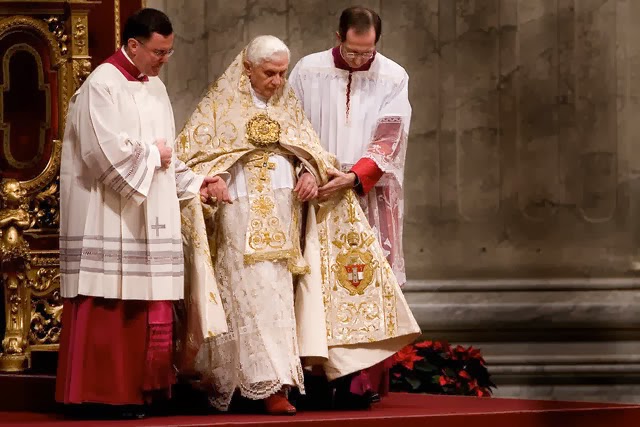 My thoughts turn with great affection and profound gratitude to my venerable Predecessor Benedict XVI, who enriched and invigorated the Church during the years of his Pontificate by his teaching, his goodness, his leadership, his faith, his humility and his meekness. All this remains as a spiritual patrimony for us all. The Petrine ministry, lived with total dedication, found in him a wise and humble exponent, his gaze always firmly on Christ, the risen Christ, present and alive in the Eucharist. 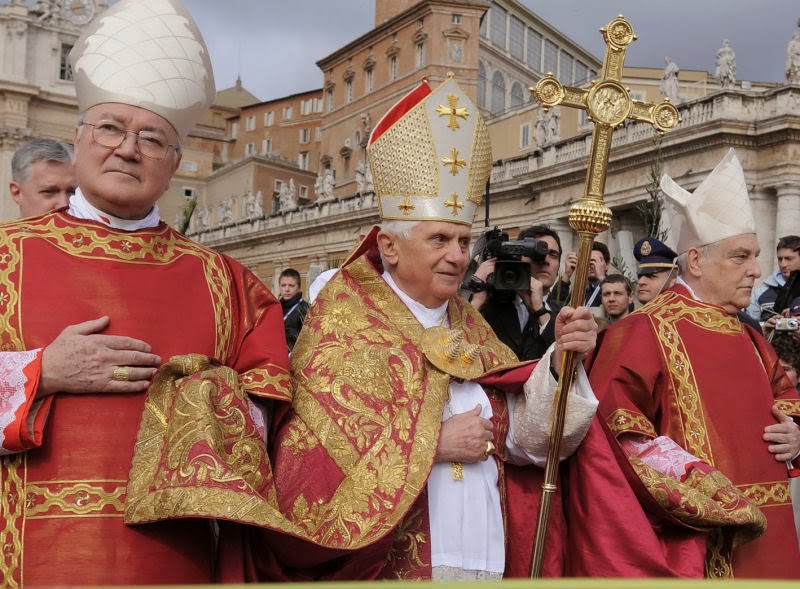 We will always accompany him with fervent prayers, with constant remembrance, with undying and affectionate gratitude. We feel that Benedict XVI has kindled a flame deep within our hearts: a flame that will continue to burn because it will be fed by his prayers, which continue to sustain the Church on her spiritual and missionary path.
Posted by Barona at 14:38

Email ThisBlogThis!Share to TwitterShare to FacebookShare to Pinterest
Labels: Crisis in the Church, Pope Benedict

He was a great Pope. Our recent popes have been nothing but great blessings. Too bad the world doesn't recognize that. With you in town, however, I am just glad my name is NOT Fr. Thomas Rosica. God bless you. Susan (Not Fr. Thomaas Rosica) Fox www.christsfaithfulwitness.com

Benedict was such a blessing in so many ways. He was assaulted on every side by those who thought they knew better than he did. His recoverey of many elements of the tradiions of the church was wonderful.I miss him terribly and feel as though we have been cast back into the void.

I find Fr. Rosica's comments very presumptuous. Especially in light of the interview given a couple of years ago by the Master of Papal Ceremonies, Msgr. Marini re: Benedict's efforts to re-introduce beauty and worship in the Papal Masses and how he
(Benedict) had made the choice for more traditional vestments. Something which I personally prefer also, they certainly do add to the sense of beauty and removes the mind from the mundane.
Rosica's comments also imply that Benedict was led in this regard, which I find highly disrespectful. His comments remind me also of the tweets sent out by Cardinal Mahony of LA shortly after Francis was elected, being grateful that the church had turned away from "high" church ceremonies and ceremonials. I wonder how His Eminence felt as the Emeritus Pope was sitting a few feet away from him at the last consistory and was part of the group of Cardinals that greeted the former Pope.
With supporters/friends like Rosica and Mahony I guess Pope Emeritus Benedict does not need any enemies.
I pray the good Lord will not allow Fr. Rosica to enter the Vatican under any position as I am afraid that is his ultimate aim. He is very much done being the simple CEO of a small "catholic" TV network in the backwater of Canada.