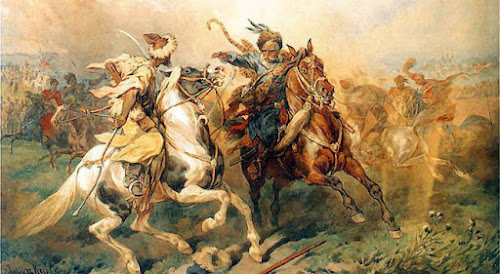 Today we mark the anniversary of the victory of the Polish-Lithuanian Commonwealth and their allies over the expansionist Turkish Empire. Contrary to popular myth (very aggressively promoted by neocons and their warmonger allies), the clash at Vienna was not a clash between Christianity and Islam. It was a clash to halt the Turkish conquest of central Europe. Illustrative that this was not a "religious war" is reflected in the alliances. It all gets a bit muddled when we find Lipka Tatars fighting for the Polish-Lithuanian Commonwealth  (the Tatars were held in high esteem by John, who admired their fighting spirit, bravery,  and patriotism), whilst "His Most Catholic Majesty" Louis XIV the "Sun King" was energetically backing the Grand Vizier; merely continuing the Franco-Turkish Alliance of Francis I with Suleiman the Magnificent. "His Most Catholic Majesty" returned to his evil deeds in the late 1680s when he launched the Nine Years War, freeing up his Turkish allies to attack Belgrade and expand into the Balkans. We saw some of the long term effects of this evil in the fratricidal Balkan Wars replete with the neo-pagan forces of NATO bombing Orthodox churches into rubble.

So much for a "crusade" (be it in 1683 or the  90s. Or for that matter the invasion of Iraq, the stealing of Syrian oil in 2020 etc.), so much for Christian witness, so much for "blessed are the peacemakers". Christians would do well to remember this when they are tempted by the devil to hatred.

We need to go and witness by our life: to every Moslem, Jew, Buddhist, Hindu and other non-believers who come our way. In the same way, let your light shine before others, so that they may see your good works and give glory to your Father who is in heaven. (Matthew 5:16).

While we are at it, we may find we are a good example to the wayward and nominal Christian. It was Bishop Fulton Sheen who once said that there are so little conversions, because non-believers have yet to meet an authentic Christian. Let us, beginning today, like King John, show that we are authentic Christians.

you say that the Vienna clash was not religious and afterwards paint the NATO-Serbia clash as neo-pagan against Orthodox churches.

To be precise I pointed out that the long-term effects of the Turkish conquest of the Balkans (enabled by France under their Most "Catholic" Majesties) was a fratricidal war that included NATO becoming involved involving bombing of Orthodox churches (not to mention using uranium depleted weapons).