Cardinal Turkson at the COP-21: another masonic, godless speech before the UN by a Vatican official 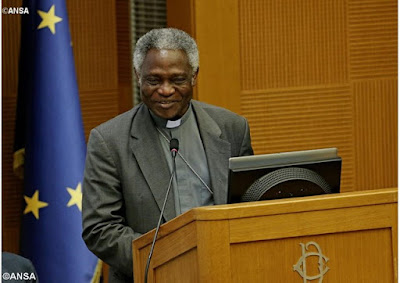 This past week has been one of continual outrages coming from the Holy See. On Tuesday we had the scandal of the Pope denouncing his predecessors as keeping the Church in the "shoals"; later that evening we had the masonic World Bank (co-founder was the communist, Harry Dexter White) projecting blasphemous images on the sacred Basilica of St. Peter's in Rome. For further information see here and here. Just yesterday, the Holy See issued a de facto anti-semitic document that refuses to proclaim Our Lord Jesus Christ to the Jewish people.

But there was at least another outrage. It should not be passed over in silence, but denounced. Cardinal Turkson, the President of the Pontifical Council for Justice and Peace gave a speech before the various international delegates at the UN "global warming" gathering in Paris on December 8, the Feast of the Immaculate Conception. Not once - I repeat - not once did he mention God. Not once did he link creation with the Creator.

Truly, this speech must have warmed many a masonic heart; many an agnostic heart. Turkson spoek many a word about "combating" poverty, and "climate change", but not one word about protecting the most valuable part of creation: the human person. Not one word about the daily slaughter of the unborn in the most dangerous place in the world: the womb of the mother.

High Level Segment of the COP-21

I recall Mother Theresa. I'm paraphrasing here, but someone asked about her work in Calcutta, and she said that her work, without God, would be social work, and she could not do it, would not be able nor interested in doing it, was her point.
These are mere men, who inhabit the Vatican. They are not Christian believers. They have little in common with the Gospel, the message or the Person of Christ. He has nothing to offer these worldly men. They have all they need to solve the world's problems, they do not need the philosophy of Scripture. It is irrelevant to them, therefore they do not cite it as food for thought, or preach it.
God deliver us from such men as these, and quickly.