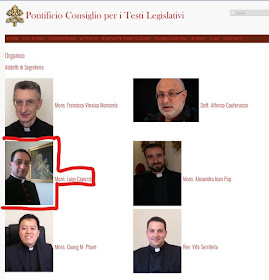 Luigi Capozzi, is a sodomite.  He is a traitor, a Judas. He is an agent of the devil.

In fact, he is also "Monsignor" Luigi Capozzi,a priest on the Pontifical Council for Legislative Texts.

Is it not edifying to know that the Widow's Mite is being used for such '"pious" behaviours?

Is it not also edifying, dear readers, that this Judas-priest, this vile, filthy sodomite who has handed himself over to demons is interpreting "legislative texts" for the pure Bride of Christ?

Such love for the poor, the down trodden, the marginalized, the oppressed these wealthy, high flying sodomite priests have that they have turned the Holy See into a gay bathhouse.

What kind of man is Luigi Capozzi to be such a Judas?

What kind of men surround him? Protect him? Encourage him? Control him? Blackmail him?

Just how many fellow sodomites are there in the Vatican?

Dear friends, pray for the conversion of these damnable sodomites. Pray they convert, retire to monasteries and lead lives of prayer and penance.

But in all of this dear friends, never, ever forget: Christ is in total and absolute control of HIS Church. He is allowing this infiltration of evil men as a punishment for our infidelities. Let us too pray for our own daily conversion.
Barona at 09:05
Share

We believe in a good argument, that means NO ad hominem attacks. Comments are those of the commentators and not those of this blog. You may use a pseudonym... we do... Behave like a guest in our living room and you will be fine.