A sad time of year - but it doesn't have to be 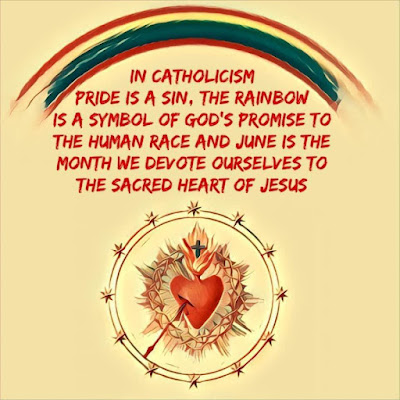 Readers of this space - new and old - will understand that Toronto Catholic Witness has spoken out against Pride Month, sodomy, and all of the horrible addendums which come with the promotion of homosexuality, both inside and outside of the Church.
Which is why June is something of a sad time of year.
In Catholic understanding, June is the month devoted to the Sacred Heart of Our Lord Jesus Christ - Blessed be His Name forever! June is also the month where it is most likely we will be seeing Corpus Christi processions, pilgrimages to the great Catholic sites in the Northern Hemisphere, and this is the month where the calendar becomes filled with saints such as SS. Peter and Paul, S. Marcellinus and many others. All in all, June is a spectacular month.
In light of all this, it is sad to see all of that thrown away in favour of something that is not only recently made, but unnecessary and promotes sin to boot. (Sin that Our Lord came to cleanse man from via His Precious Blood on the Cross.) It is sad to see Catholic institutions across Ontario promote this. Longtime readers will remember that we have spoken against this troubling tendency in the Toronto Catholic school board.
The sadness comes not just from the fact His Sacred Heart is ignored, and that Catholic people promote Pride Month. It also comes from the fact that the core tenet of Pride (Sodomy) Month is based on a lie. One is not born a homosexual. Readers of history will understand that homosexual tendencies have been present throughout civilization - it is just how it is seen now that is new. In the past, it was understood that such attraction did not fit with the grand scheme of things, and so it was not widely known abroad. Now, it is for everyone to know. Following Blessed Paul, we boast of our weakness, not our sin.
If there are any readers here who are struggling with same-sex attractions, please know that there is hope. You are not bereft. If you are caught in the grips of acting on your same-sex attractions, please go to Confession. Avail yourselves of God's just mercy - He is waiting for you to come to Him. He does not want to see you without hope. Throw yourself in to Christ's arms and He will take care of you. It will be a hard road, filled with heartache and sacrifice and suffering. I will not lie to you. But it is worth it, more than you may know.
June is a sad time of year - but it doesn't have to be. Confession and engaging with His Sacred Heart are only two helps in making it a happier month.
Posted by Irenaeus at 10:18

Sadly, the adult Catholic leaders have for the most part left the room. Whether it’s our schools, our universities, our parishes, those responsible for Catholic education and evangelization are mostly silent. And the sexual identity activists will not settle for accommodation but only for total capitulation to their every demand. The TCDSB is still dealing with lgbtq student complaints and violations of the code of conduct. Trustees need an integrity commissioner to referee Christian behaviour. Many Catholic school boards have become so dysfunctional that the activist students, teachers and trustees are now running the system. Just say that Jesus loves everyone. The sin of Lucifer, pride, has become what Catholic schools are celebrating this month. The idea being that if those on board the Titanic say nothing about crashing against an iceberg, then all must be fine. The real scandal is that those in charge are in denial of the problem and go on as if all is well, and have no issue with continuing to collect their generous salaries and benefits. The Machiavellian belief is: let somebody else solve the problem after we retire. God help us because we can really mess it up in a big way without Him. You would think that St. Charles Lawanga and his martyred companions died in vain.

All excellent points, kind sir. As to your final point, no, St. Charles Lawanga and his companions did not die in vain. The fruits of their resistance are still see today.

In an ideal world, the priests, nuns, and other religious would be the ones informing the Catholic schools what's what through their instruction. How far we have fallen and how far we need to travel back.