BREAKING: Candian Bishops sit SILENT while Artur Pawlowski is dragged off the steeets and thrown in jail 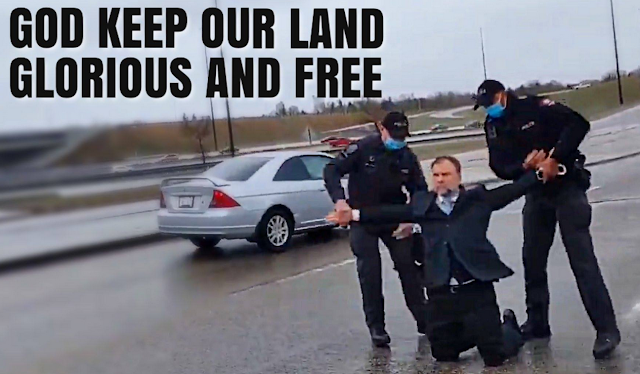 Artur Pawlowski has just been arrested by the police in the Province of Alberta (once known as the "Texas of the North", because of both the cowboy spirit and oil) under the Premiership of the wretched Jason Kenny.

It is understood that Pawlowski was forced to kneel in the middle of a highway in Calgary, like some violent gun-totting drug lord; then literally dragged off by the police, and refused access to a lawyer.

This shocking behaviour is more reminiscent of the Gestapo or KGB, not what used to be the highly respected Canadian constabulary, who have all but lost respect by Canadians given their scandalous behaviour and brutality witnessed against law-biding Canadians.

Since the imposition of lock downs across this country (originally stated to be two weeks, but now well in excess of one year), it cannot be denied that Canada is rapidly transitioning into an authoritarian State, where the Constitution, the rule of law and due process is ignored, if not openly violated.

Where is Bishop McGratten of Calgary?

Where is Archbishop Smith of Edmonton?

Where is the Primate of Canada, Archbishop Lacroix?

Where is Cardinal Collins?

Where is Archbishop Lepine?

WHERE ARE THE CANADIAN BISHOPS?

HAVING PROSTITUTED THE CATHOLIC CHURCH TO CAESAR FOR 30 PIECES OF SILVER, THEY SIT SILENT, OBEDIENT TO THEIR WORLDLY MASTER.

Where is the spirit of St. Thomas Becket?

Where is the spirit of St. Stanislaw?

Where is the spirit of St. John Fisher?

Friends, we should give thanks to Almighty God for this crisis, for it has smoked these men out for what they are: false shepherds and hirelings.

Where is Canada headed while our bishops sleep?  We would do well to study the works of Mussolini for the frightful answer.

The Fascist State, the highest and most powerful form of personality, is a force, but a spiritual force, which takes over all the forms of the moral and intellectual life of man. . . . It is the form, the inner standard and the discipline of the whole person; it saturates the will as well as the intelligence... the Fascist conception of the State is all embracing; outside of it no human or spiritual values can exist, much less have value. Thus understood, Fascism, is totalitarian, and the Fascist State - a synthesis and a unit inclusive of all values - interprets, develops, and potentates the whole life of a people...

All of this was predictable, as the "Lion of Calgary", Bishop Fred Henry wrote against "Totalitarianism in Alberta". Alas. He was retired and his works blacklisted.

What a scandal. Pastors are arrested and jailed, and we get silence from the Catholic bishops. If they don't stand up for religious liberty and faith, who will? Once the shepherds retreat from the public square one can expect some churches will eventually be forced to close. If the faith isn't defended during this "pandemic" and when pastors are jailed, who needs it when times are good? It's all so sad when one considers the price Christ paid to save humanity. Keep up the good work at TCW.

Year after year the scandals initiated, approved of and eventually ignored by the Roman Catholic Church increase. Ever since Francis filched the leadership and came out with some utterly questionable theology, as well as surrounding himself with men of totally dubious spirituality, discerning Catholics (among them cardinals) have questioned his reign through various means. The Dubia, Protest Letters signed by pristine theologians and academics, courageous parish priests and some (albeit very few) bishops and scathing newspaper reports on the moral state of the kingdom (I.e. the Vatican), have all been buried under the filth of global permissiveness and profound corruption.
IMO just get rid of him and his ilk - in other words, Catholics, SACK HIM, FIRE HIM, LET HIM GO.....spewing out millions of words in protest of the creeping evil he promulgates will not change a thing!!!! Get it???????

Unfortunately, the laity nor the clergy do not have the power to sack the pope. Moreover, the papacy is not a job in the same sense as a CEO of a bank, for instance.

This reality is why I have stopped speaking out against the Pope. It is akin to shouting into a void, and brings to mind the notion that "he doth protest too much" and doing little else.

There are better things to do in our short stays on Earth.