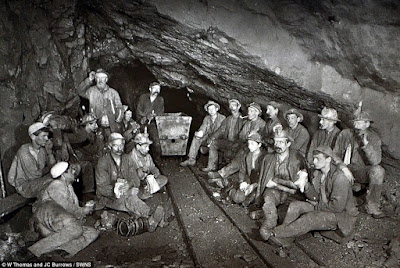 Our Canadian readers may be familiar with the name Anne Roche Muggeridge, the daughter of a Newfoundland coal miner who passed on to her eternal reward in 2010. She is known for two things: establishing the Latin Mass community in St. Catherine's, Ontario (which is still ongoing), and her books The Gates of Hell and The Desolate City.

One thing that struck me in her books is how she juxtaposes her early life in the Church in Newfoundland and her life adjusting to the Church after the Council. Of note are two visits to a convent in Newfoundland, before and after the Council. In her visit prior to the Council, she describes the nuns as having a proper sense of decorum, piety and bearing appropriate to convent life. After the Council however, the rapid abandonment of these norms caused great pain in Anne. She makes it clear that, as one from the working class, this was something she did not want to see or witness, and that it caused her great sorrow to see such a thriving community whittle away in a number of years.

Which brings us to today.

On Twitter this morning, a user by the name of Michael Grasinski revealed that he attended his first High Mass yesterday. In the Tweet he put up, he admitted that not only did he connect with the saints in "a new and special way," he also felt "like [he] had be robbed up to this point."

In a few short words, Mr. Grasinski echoed what the late Mrs. Muggeridge felt in the immediate aftermath of the Council.

She, Mr. Grasinski, and countless others, including you and I, have been robbed of our heritage because of what a few conniving Roman intellectuals decided what would be "best" for the Church.

Let me be perfectly clear.

The changes foisted onto the laity during and after the Council - a laity overwhelmingly comprised of the working class - were not asked of on the part of the laity. Not. One. Iota.

These changes were instigated and put into writing by men who had let the intellect supercede their faith, if they had faith in the first place.

It is a pattern that continues today, with the likes of Cardinal Marx and countless others pushing for yet more changes to the perennial rituals and teachings of the Church using intellectual - flawed, yes, but intellectual nonetheless - arguments.

To understand just how intellectually-driven the "reformers" were at the Council, I recommend a reading of The Rhine Flows into the Tiber, written by a Father who was present for much of the Council and speaks to the machinations that went on.

Machinations that were in no way instigated by the working class. 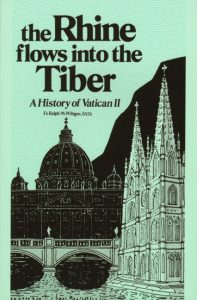 Email ThisBlogThis!Share to TwitterShare to FacebookShare to Pinterest
Labels: Crisis in the Church, Vatican II

Vatican II is the triumph of the New Theology. The apostles for this faith destroying playbook were to a great extent jaded, faithless academics, far removed from the rank and file Catholic. Ahh but they knew what was best for us didn't they? Canada's most prominent exponent of this rot was Gregory Baum.

A triumph of the new theology as Brian said, and as such a new and aberrant Catholicism.
The so-called wreckers, sorry fair-minded innovators, even called for a Vatican III, though we do not hear about that these days.

Francis is the first pontiff of the liturgical revolution in that he was ordained after the changes.

Francis is fierce in his opposition to any 'reform of the reforms' but then this is the man who allowed the infamous tango in front of the altar after Mass.
We hardly need an altar rail if Christ's eternal sacrifice on Calvary is only the warm-up act to Come Dancing!

Does Francis know how ill-informed Catholics are about the tabernacle and the Real Presence of Christ in the Eucharist?
Doesn't he see that all of this can only be traced to the Council?

Behind the squalor and liturgical trashiness of the church today stand the haunting figures of Cardinal Ottaviani, Cardinal Siri, and of course the true prophet of Vatican II, Marcel Lefebvre.

One thing that puzzles me is the way we critics of Vatican II are dubbed ultra-conservative or alt.right.
My social democratic instincts are offended by these glib labels.

I admired the work of some supporters of Vatican II ranging from Hans Kung and Rosemary Haughton to Graham Greene and Morris West.
Many a time I imagined having conversations about the Council's legacy with John Henry Newman, Hilaire Belloc and GK Chesterton - would any of them have condemned Marcel Lefebvre the way the Progressives did?

Damian Thompson is a first-rate journalist and the new proprietors of the Catholic Herald are foolish to let him go.

In the above article he reminds us that Pope Paul VI was unhappy with the inadequacy of the 'new' missal which carried his own name.

Cardinal Raymond Burke may have reflected on this the day that he was so brutally fired by Pope Francis.

Akita: Another Conspiracy to Silence the Mother of God.
The Remnant Video 23 July 2019.

A well-researched piece from Michael Voris.
Let's hope it goes viral in the Catholic world.

And again on YouTube for all followers of Toronto Catholic ...

Moral and financial corruption in the American hierarchy is must worse than we realise.
They are indeed a den of vipers!

The fall-out from Pope Francis' caring-sharing Vatican II Church ('We are all in the pilgrimage together') continues to smell like raw sewage ...

Lori did NOT tell the Vatican the truth about the millions of dollars Bransfield stole from the church to fuel his decadent homosexual lifestyle.
For among the recipients of Bransfield's largesse was ... Lori himself.

Thus Lori LIED BY SILENCE.
He LIED to the Pope and he LIED to his Lord and Saviour.

Lori's own name (and the names of other corrupt priests who received cash gifts from Bransfield) was removed from the final report.

Dirty little secrets like these are now commonplace across the US hierarchy...
Secret bank accounts, lavish residences, private condominiums on the coast where corrupt clergy can live the Champagne lifestyle with their boyfriends etc.

In Scotland the late Cardinal Keith O'Brien was revealed as a closeted homosexual who had been 'coming on' to young seminarians, and making life difficult for young priests who refused his advances.

O'Brien took his lover with him to Rome during the conclave that resulted in the election of Pope Benedict.

Pope Francis allowed O'Brien to retain his title of cardinal.

Little wonder that lay Catholics are talking about James Carroll's essay in the June 19 issue of The Atlantic Magazine, 'Abolish the Priesthood'.

The mention of Hans Kung in my comment reminded me of a most perceptive online article:

He throws light on the divergent views of Kung and Joseph Ratzinger concerning the legacy of Vatican II, Kung remaining a radical and Ratzinger becoming more conservative with the passing years.
This would make a book in its own right.

There was an old saying - the Church does its business in Rome and its thinking in France.
Yet Pope Pius XII had been suspicious of the French theologians and kept them at a distance.
Their hour arrived with the papacy of John XXIII, who surprised many by calling the Council at all!

In my youth I read Lubac, Yves Congar, Teilhard de Chardin and the French lay theologian Maurice Blondel as well as the Germans - Kung, Karl Rahner and Hans Urs von Balthazar.
So I had a great deal of personal investment in the success of the Council.

Kung gave a moving address at the funeral of Karl Barth in 1968, the most influential Protestant thinker of the early years of the 20th Century.

Barth, who had refused to take his oath of allegiance to Hitler, was invited to the open sessions of Vatican II along with other Protestants.
Earlier Pope Pius XII had described Barth as an eminent Christian thinker.

In my youth I read and reread every book of Rosemary Haughton's, who is still alive.
I can recommend several of her works: The Drama of Salvation, The Knife Edge of Experience and The Catholic Thing.
Her letters to Thomas Merton have been published.

The post-Conciliar generation such as Bishop Robert Barron continue to defend the Council. You can listen to Bishop Barron on YouTube speaking on Vatican II.

Last year Bishop Barron spoke in Edinburgh and Dublin.
I am sorry I missed the Edinburgh event.

Well Irenaeus, after all the black rain that has been falling ... hope.

Dr Oddie recounts the conversion of British politician Enoch Powell, who said of his own atheism: 'I was shadow boxing against a figment of my own mind, who wasn't standing where I thought he was standing.'

Another of Dr Oddie's incisive articles from the Catholic Herald is available online - 'Hans Kung is at it again. The Holy Father, he says, is a schismatic' 13 June 2012.

I watched an earlier episode of The Vortex - Supernatural Humanity. Church Militant 29 March 2018.

Michael Voris on the Passion, Death and Resurrection of our Lord.

Thank you for all of your comments, Mr. Haggerty.

I would caution against a reliance on Michael Voris, for reasons I don't want to elaborate on and a general desire to avoid talking about whatever it is that he is doing.

Have a lovely day.

Grieve for souls in Toronto, as the prophet Jeremiah grieved when he saw spiritual death in the city, but never ever despair or be led down despair's annexe, which is despondency.
The Word of God does not return void as Isaiah 55:10-11 tells us.

Married friends of mine told me that when they heard Francis Schaeffer witnessing in London in the 1960s, at a debate sponsored by the Theosophy Society, the audience gave him no applause as they did the non-Christian speakers, and some even booed him.
He left the public halls alone and my friends, who were not yet Christians, went after him. He told them that the Word of God does not return void and that the Holy Spirit would bring souls to Christ even in pagan London.

Francis Schaeffer died in a hospital ward with a Catholic crucifix on the wall, and in spite of his Reformed views, he told hospital staff not to take it down.

'And the peace of God, which surpasses all understanding, will guard your hearts and your minds in Christ Jesus.'
Phillipians 4:7