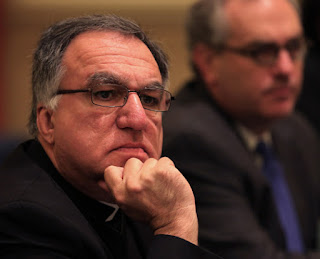 It was done quietly, with no fanfare.

In other words, Tom did the right thing in doing what he has done, and in how he has done it.

Since his plagiarism scandal broke into the Catholic mainstream this past February - Tom's incessant plagiarism was reported by Vox Cantoris first in 2014 - Tom has shown little active repentance for his actions.

Up until now, his Twitter account remained active, tweeting out the stories approved by the Catholic Establishment Media, even when he was supposedly on sabbatical from Salt and Light Media Foundation.

This is a promising development on Tom's part.

Now that he is no longer concerned with organizing media-related events, hosting his Witness show, or whatever else he did as the Catholic media darling of the Canadian Catholic Bishops, Tom has time to be a simple parish priest.

This is what all priests should strive to be: simple, ministers to their flock and unfettered with worldly affairs such as being CEOs of media entities or Twitter.

One hopes that this drastic reduction of his priestly ministry to its bare bones - brought about as it was by his own arrogant, prideful, sociopathic hand - will lead to his eternal salvation.

There is still a chance for Tom. Pray that he may find the avenue to his own salvation, and be open to God's grace as he does so.
Posted by Irenaeus at 16:30

Fr. Rosica's downfall began when he crossed swords with Vox Cantoris. Having been promoted by the Pope and coddled by Canada's bishops, Rosica's star was definitely on the rise, irrespective of his outrageous interview with ex-priest Gregory Baum. Rosica was everywhere: at Synod's, giving conferences, interviews, flying here and flying there.

An international jet-setter and celebrity priest, Rosica then drew his sword against The Vox, but was met with steel. The Vox's resounding defeat of the wayward priest, and the ensuing scandal of Rosica' behaviour brought the spotlight on the dissenter's bizarre opinions and growing outrages outside of Toronto. Suddenly he came under the spotlight in the USA and other parts of the world. What a few Toronto based blogs knew and wrote about became known globally.

For example, as Irenaeus points out, it was The Vox who exposed Rosica as a plagiarist in 2014. Sadly, lazy media, Catholic and otherwise did not follow up on The Vox's shocking expose of the dissident priest. Had they done so, we would have been rid of Rosica five years ago.

Nonetheless, The Vox's expose tells us something else. Rosica must have known that he had been outed as a plagiarist, yet he continued to plagiarize. His narcissism seemed to know no bounds. Well, he has now crashed and burned. Let us hope Fr. Rosica seeks the spiritual and psychological help he needs. Let us hope he repents (he has yet to take full responsibility for decades long plagiarism) and makes amends for all the people he has hurt. Fr. Rosica may have disappeared, but the pain he has caused so many remains.

It was unfortunate that even after Fr. Rosica was shown to be a plagiarist, that the Knights of Columbus continued to support Salt and Light. They stated that they were looking into it but had not made a decision when the scandal originally broke. When it was shown that he had lied about this academic accomplishments, the Knights remained silent. It is my guess that they will continue to support Salt and light, now that Rosica is gone.