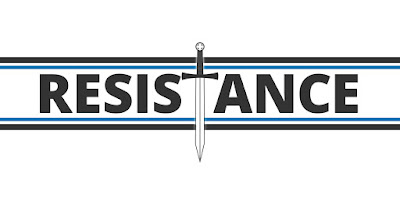 Each and every day, we are bombarded with news about ersatz priests forgetting the will of God and instead doing their will. This includes the Pope, who seems to be enjoying his power as an absolute monarch a little too much, and implementing disastrous reforms with appalling callousness towards the Woman he is supposed to treat with utmost respect: the Church.

Resist the Pope's attempts to bastardize the Church. Resist his minions. Resist the bad priests who operate without the "blessing" of Pope Bergoglio.

We are all in this for the long haul. It will not end with the death of Pope Bergoglio. Some have been at it, resisting and restoring, for many years. Some have only been at it for a few years. Some will die before seeing the fruit of the resistance. Others will only see a glimpse before they too pass on. Yet others will enjoy the rich fruits of the resistance well within their lifetimes.

There will be - and already are - many avenues to restoration from resistance. The vast majority will form families and hopefully pass on the message of resistance and restoration to their children, all the while working to the restoration of the Church in Her Glory in their dioceses. Some will become diocesan priests and work towards restoration that way. Others will enter traditionally-minded priestly groups and work towards the restoration of the Church's Glory that way. Still others will enter the traditionally-minded cloister and work towards Her Glory that way, hopefully spreading their orders and charisms around the world. Finally, others will not venture onto any of these paths, and will be simple, faithful Catholics, as has been the case for over two thousand years.

The Holy Spirit is not constrained by the whims of men. Even though He has been denied by many who supposedly love Him, the Father and the Son (which unfortunately includes Pope Bergoglio), He has found a way. The Holy Spirit continues to work in the hearts of the faithful, despite the fact that so many have denied Him, laity and clerics alike.

We are not bereft. Far from it. But we must do our part. Indeed, we must resist! Rebuild! Restore!

Our Lord promises us through Scripture (ex. Amos 9:14) that He greatly rewards those who work for the positive sake of the Kingdom, and have shown His example to the world.

I daresay many such people will end up in Heaven, where their sorrows will be forgotten, their tears wiped away, and they will be greeted by their relatives and friends who have gone before them to Heaven.

Friends, let us resist the machinations of the Adversary (be they through Pope Bergoglio, his successor, the wayward clerics, or the laity), work towards the restoration of the Church in Her Glory, and hope to enter Heaven as we do so! 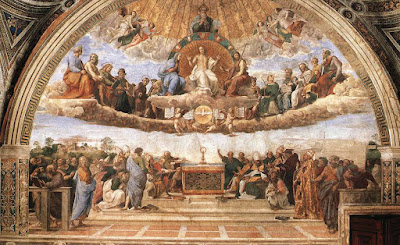 Email ThisBlogThis!Share to TwitterShare to FacebookShare to Pinterest
Labels: Crisis in the Church, Eucharist, Gospel of Life, Pope Francis

Understanding you I would rather say: keep the narrow path of Jesus, do not deviate on applause or disdain!

How many times do we have to tell you that Bergoglio is not pope because he was already impeded by being an apostate in Argentina? Perhaps you do not believe the Magisterium of the Catholic Church that has decreed that the elevation of a heretic to the papacy is invalid and null. https://gloria.tv/video/KzqopZSWk4Jj1kbhJEWUipz8F

...And how many times do we have to tell you Bergoglio is pope by virtue of the law and acceptance by the priests of Rome, of whom he is their bishop?

I trust you note that I have at least acknowledged he is not acting as a pope should by calling him by his born surname.

I also admit that, following Dickens, this is one of the times where "the law is an ass."

But whether or not Bergoglio is pope is mere speculation at this point.

The Empire strikes back .