Keep calm and resist on 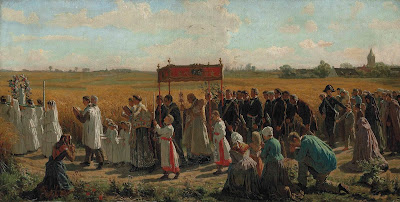 Yesterday, this writer went to the local chapel for Sunday Mass, where a humble-yet-victorious procession was held for Corpus Christi. As we went along the paths around the property where Mass in the Old Rite is said, I felt an exhilaration at being part of such an awe-inspiring moment, no doubt fueled by the immediate physical proximity of Our Lord. This, this is what it means to be Catholic!

As I went home from such an awe-and-then-some moment, I read this post from Vox Cantoris. Vox is wonderfully optimistic in the piece. Not only does he rally everyone to fight together against Pope Bergoglio, reminding them of the facts of the crisis in the Church, he boldly declares that:

"[A] future Pope and Council will declare that this filthy pervert-protecting Argentinian and all his works, anathema. Vatican II will be corrected and its errors denounced. Of this, I have no doubt."


Vox is right to be optimistic and bold in pronouncing eventual victory through the means of resistance. I share his sentiments. By resisting Pope Bergoglio and his ilk, we frustrate them immensely. They have given us so many reasons to splinter, to fall into despondency and depression, and basically do nothing as we fight amongst ourselves. The current hysteria over the Amazonian Synod's discussion of viri probati is only the most recent example of this. This is what the enemy does in war, and since this is a war of the highest stakes - our own salvation through the safeguarding of the Church - we have to resist. We must resist. The best form of resistance is not only by actively resisting (be it through the priesthood, religious life, or lay state) the Bergoglians in their schemes, but by also adopting a mindset where we see what goes on, and carry on with the active means of resistance in spite of that.

This is what frustrates the Bergoglians the most: seeing Catholics shaking the dust from their sandals and carrying on the Resistance in spite of all attempts to sabotage it, be it from outside or within.

Fellow Catholics, do not fall for the schemes of the Bergoglians. Let us not break off into our own little groups and make fallacious declarations that we are the better Catholics than other Catholics because we don't do this or that thing. It is a trap, a clever one designed by the Enemy himself, who wins souls to himself through self-deception. Unfortunately, many Catholics have fallen for that trap, and I daresay that will not stop until we smarten up.

Please do not forget. We have Christ on our side.

He is winning, as He always has.

People are waking up, taking the red pill instead of the blue.

Yesterday, I noticed that there were a lot more Corpus Christi processions than even last year, but that may because I am more on the lookout than I have been previously.

Vocations have been on the increase. More and more people are entering the seminary or cloister, many of whom seem to be doing so for the glory of God and not themselves.

More babies are being born to God-fearing couples, many of whom are anxious to instill the fear of God in their children.

We are in difficult times. Change is fast approaching. We cannot deny that the Amazonian Synod is part of that. We must prepare for radical changes to our worldview, be they good or ill.

We must keep calm and resist on. Pope Bergoglio and his ilk will pass on, just as all finite things will. Christ and His Bride will stand firm, just as they have long before us, are doing so alongside us, and will continue to do so in spite of us. 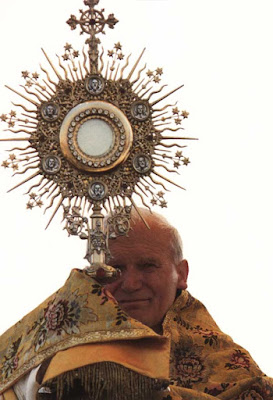 Agreed! We all have our little part to play, and we should do it, whatever opportunities present themselves. It is rewarding to feel you do anything for the Lord or the Church or the faith. It is between you and God, He knows about it, nobody else has to, although you can perhaps inspire others with it.
One day we will answer for what we did or did not do for the Kingdom. We should have some little thing to offer, however humble, we did not capitulate to evil by ignoring the assaults from the Bergolians.