An apology to Cardinal Pell and his supporters 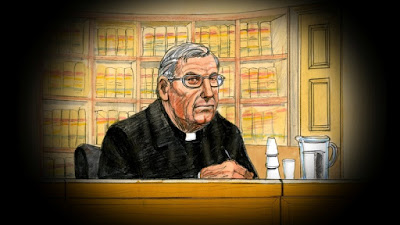 Just over three months ago, I published a piece calling for moderation over the conviction of Cardinal George Pell of Australia after his second trial regarding his alleged abuse of minors. In that piece, I argued that since we did not know the facts, it was unreasonable to boldly proclaim either his guilt or innocence with certainty.

Even though I did not say it in so many words, I had my doubts about the Cardinal's innocence. I truly did.

I take those words back.

Cardinal Pell, I am sorry for thinking so unkindly of you.

To those of you who have unflinchingly supported Cardinal Pell throughout the entire affair  - most of all Deacon Nick Donnelly in the UK - I am sorry for also thinking unkindly of you. I, who did not even know of Cardinal Pell before he went to Australia to undergo trial, was wrong to think ill of those who knew Cardinal Pell personally.

Cardinal Pell's case is under appeal now. From what I read, the prosecutor's case against the Cardinal is falling apart, facts and dates keep being changed, and more and more doubt is being added to the likelihood of sexual abuse after Mass in a Cathedral.

Not only that, but the Cardinal's behavior is noteworthy. He has been largely silent throughout all of this. He accepted his imprisonment without a complaint, in silence. He has steadfastly maintained his innocence. People who know him have continuously maintained that for Cardinal Pell to do what he is alleged to have done is totally out of character. He himself has indicated as much.

Cardinal Pell, please know that I am praying for you. I hope you are found innocent of what you are alleged to have done. I truly do. I hope you will be acquitted, but if you are not, I hope you will take it as Our Lord Himself did. He is your role model, after all.

If any of Cardinal Pell's supporters read this little blog, and are in contact with him, please assure him of my prayers.
Posted by Irenaeus at 14:38

Thank you for posting this. I recall your piece about Cardinal Pell, and I'll admit it depressed me. I've followed Pell's case closely form the start and have known in my bones that he is a good man, wrongly accused. I ma impressed and gratified by what you have posted here. God bless you. I, too, am praying for Cardinal Pell.

Thank you. Today also happens to be his 78th birthday.

Perhaps you should watch these before you begin to think of Pell as good man: