Beware of Malachi Martin's Hostage to the Devil?

Some time ago, I acquired a copy of Malachi Martin's Hostage to the Devil. It made for terrifying reading. 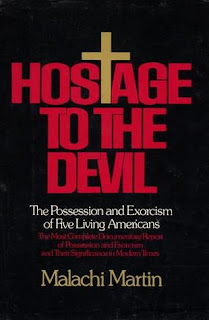 However, I soon noticed that the accounts of demonic possession were written in such a way that they appeared sensationalized. Even, novel-like. At first, I attributed this to Malachi Martin's writing style and ability. This positive notion was weakened when I was informed by the local priest that one of the accounts falsely depicted the mother of the possessed as pious and devout when she was actually prone to swearing, swearing her daughter exhibited when she was possessed.

My suspicions were aroused. Was Malachi Martin lying? Then, I read this.

In Hostage to the Devil, Malachi Martin presents himself as conservative and a steadfast adherent to Catholic Tradition.

The linked article suggests otherwise, bolstered by my own suspicions about the man. After all, it is hardly a new phenomenon. The former Benedict XVI is such a case, along with Cardinal Dolan.

Are we to be wary of Malachi Martin's Hostage to the Devil?
Posted by Irenaeus at 13:09

I thought the book was not only sensationalized but also salacious. It seemed to be depicting evil for evil's sake. I threw it away without finishing. As to Martin's later life, I dunno, but people do change, often even converting.

The blog that questions Martin cannot be said to be scholarly. A brief perusal of it identified a near hysterical Jansenism, obsessed with women's attire. Are these people real, or are they setting up blogs to mock the Catholic Church? One wonders.

I agree with "Barona".