No, there is no such thing as a "counter-revolutionary" 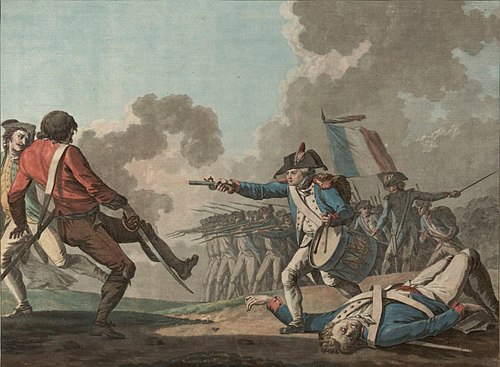 Last week, in a post speaking about the lure of the "easy answer" to the so-called "true traditionalist," I referred to a group known as the "counter-revolutionaries."

With Lent now underway, I figured it would be a good time as any to address the problem of the "counter-revolutionary," and how referring to oneself as such is detrimental to one's spiritual life, speaking as someone who once considered themselves to be a counter-revolutionary.

To give this topic due diligence, it is necessary to split it into two parts. This post will give the ideological basis of the counter-revolutionary position, while a subsequent post will explain the foolishness of such a position.

Essentially, a counter-revolutionary holds themselves to be the best possible solution to two problematic positions that they see as making detrimental concessions to the modern world. These other positions are termed "neo-conservatives" and "neo-traditionalists." According to the counter-revolutionary, a neo-conservative exhibits the following characteristics while attending either the Novus Ordo or the traditional Mass:

Additionally, many of them supposedly exhibit the following personality traits:
According to my sources, it is best to refer to these personality traits as "pinko" so as to highlight the fact that neo-conservatives are liberals who think they are not.

A neo-traditionalist is merely someone who holds these same views yet goes to the traditional Mass exclusively.

As one can expect, a counter-revolutionary holds themselves to be in complete opposition to the ideas espoused by neo-cons and neo-trads. They consider themselves more Catholic, not always explicitly, but implicitly. They degenerate the American Constitution. They advocate the union of Church and State. They vocally promote the doctrine of the Social Kingship of Christ, with the added condition of a monarchy being the only government where this can be realized, while participating in a democracy in a direct fashion (such as voting) is mortally sinful. They also speak against feminism, and the evils of allowing women great independence.

Such a position is ridiculous. Why? That will have to wait for a future post, but for now, consider how elitist and snobbish holding oneself to be a counter-revolutionary is. It is imagining oneself to be a solution to a problem that will not only never go away, but contributes to it.

Is this what our Lord wants of us?
Posted by Irenaeus at 09:45

You are just like a dog with a bone with your grudge about those who love the Mass Jesus desires aren't you? Just wait a little while and back you are to your so obvious resentment and one must add your palpable haughty attitude trying to defend the novus disorder Mass intended since Vatcan 11 to push false ecummenism (end result of Freemasonry) infiltration by yes communists, feminists sodomites and atheists and generally all kinds of people who hate Authentic Catholicism. Here's an idea why don;t you listen to Father Issac's Lenten Mission and DO IT, and stop trying to denegrate people who refuse to go to a Mass that is ever increasingly full of people who have no reverance for Jesus and His Sacrifice. Why don't you go to Confession and do a traditonal examination of consciense for all the mediocratiy, not bery beiled malice and disdain and yes pride you exibit in your blog probably related to trying to protect errant bishops etc. and with it, attempts to lead people astray and in your very obvious way try to insult yes , here's that oh so awful term in your eyes only since you do not acknowledge different levels of deceit- true traditonalists, because like many groups some so called "conservatives or tradionalists just play the role, hence the neccessity of some people to coin said terminoligy. While you are at Confession do eveyone a favour and contemplate the fact that you have two pictures of two popes at the top of your blog. Newsflash there can be only one. As was mentioned before who are you protecting? or are you a freemason perhaps? Sure are a lot of them around and in the Church and amongst bishops and cardinals. Just sayin' regardless take your stupid anger about those who follow Jesus to a good confessor preferably one at a True tradional Mass. i.e. the Latin Mass, and you start behaving and practice some true humility

Do I know you?

It is obvious anonymous is a false flag "traditionalist".

From my observations and experience, the paradox is, that these "counter-revolutionaries", are themselves imbued with liberalism. They wish to "rebel" against society and the Church (pre-judging her without any authority), and then to stop. Revolution always has a radical and then conservative stage. Unfortunately, revolution is built on a skid; and inevitably another stage of rebellion happens, against the earlier rebels. In the US, e.g. we had the Virginia landed gentry rebelling against George III, to then being overthrown by northern capitalists, who in turn were overthrown by FDR socialists, and so on.


The problem with the "counter revolutionaries" is they place far too much trust in princes, and not enough in the Prince of Peace. The solution is the Cross, not Man.

Anonymous Anonymous said...
You are just like a dog with a bone with your grudge about those who love the Mass Jesus desires aren't you?

Clearly, you don't know the writer. Then again, maybe you do and you're one of those counter-revolutionaries that he is writing about.