Help a man return to the Canon Regulars of St. Thomas Aquinas!

It is a sad fact of the world that if a man desires to enter a religious community, he must be debt-free.

It is in recognition of this fact that I am imploring financial assistance on behalf of my friend, Cody Shah Theagali. 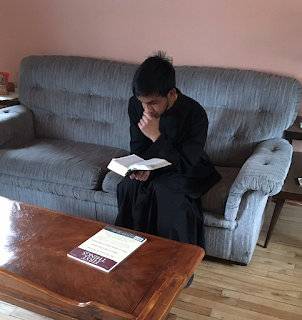 Cody and I met many years ago, when we were both attending university and discerning whether or not we should undertake priestly studies at the local seminary, St. Augustine's. For different reasons, and shortly after one another, we discerned away from that path and are pursuing other paths.

Cody's discernment has led him to a community known as the Canon Regulars of St. Thomas Aquinas. Although it is currently based in Ohio, it is fairly nomadic on account of the lack of a bishop, which they are continuously aiming to remedy by writing to various bishops in the States.

The Canon Regulars of St. Thomas Aquinas, as explained on their website, offer the Mass exclusively in the Old Rite, and currently pray the Little Office of the Blessed Virgin Mary. Their spirituality is a complimentary mix of Augustinian and Carmelite spirituality. In time, they hope to pray the full Breviarium Romanum in Latin. The ultimate goal of this community is for all members - including Cody - to attend seminary so as to study to become priests offering the Old Rite. They can only do that once under the auspices of a bishop.

Cody considers himself to be a member of this community - specifically, a postulant. Cody is currently here in Canada. He regularly assists as a server in the Holy Sacrifice of the Mass - almost daily - but, as one might expect, he is anxious to return to the Canon Regulars of St. Thomas Aquinas.

One particularly large component of his anxiety to return is the significant amount of debt Cody needs to pay with regards to his schooling. As of this writing, Cody has close to 30 thousand Canadian dollars in debt, with interest accruing daily. He is no position to pay it off himself, and nor is his family. It is for this reason Cody has teamed up with the people at Funding Morality to give himself a platform so he can work towards getting rid of his debt.

I urge you to consider helping Cody pay off his debt. I say this not only because of its sheer amount, but because I can vouch for Cody's suitability for this community. He is not prone to the excessiveness or extremes practiced by some members of the "traditionalist" community here in Toronto -  all people Cody and I used to know. He is someone I would consider balanced and gives proper thought before acting. He is someone who takes the Faith seriously and is prone to introspection and moderation - a few of the many good qualities one needs to be a good religious.

I am honored to name Cody as one of my few good friends. He has assisted me in many times of need, and it was thanks to his prayers (alongside God's grace, of course) that I was able to squash the silly notion that I am a counter-revolutionary. So I owe him much.

If you would like to connect with Cody directly for any reason - be it assurance of prayers or some other means of support - you can do so via his email, codyshahtheagali [at] gmail [dot] com. Any bit helps.

Tell your friend to get a job and pay off his own debt.

That would teach him the value of hard work and sacrifice.

Anonymous 11:26. You have made a serious charge, and behind anonymity. If you return, please include your name and address so that we can put you in contact with our friend.

Cody has a job. In fact, he got it two days after I made this post.

I understand your concern, but there was hardly a need to be so sharp about it. Assuming the worst of someone has never gotten us anywhere good.

I made no assumptions. The facts were laid out in the article. The young man incurred a debt without a plan or the means to pay it off.

I am glad he has a job. Now let him work for a few years to pay it off. The experience will make him a better man and better prepare him for the religious life.

Speaking frankly and forthrightly to someone is an act of charity when called for and that is what was called for.