Treating the Pope like an absolute monarch is problematic 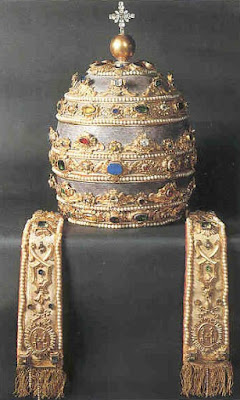 Over the past few months, I have noticed a disconcerting trend amongst those who attend either the Novus Ordo or the traditional Mass, in a general sense. It does not apply to all, but it is disconcerting all the same.

What is this trend? Papolatry.

Papolatry comes in many forms, but all of them give the pope way too much power, more power than he justly deserves. Perhaps the most dangerous of these is treating him like an absolute monarch, holding him to be above the law, above all reproach and punishment.

This need not apply just to our incumbent pope, Francis. It can and does apply to any of the popes throughout history, at least down until the end of the Roman persecutions.

Indeed, as it stands now, the pope can flick away canon law with his finger ... but let me ask you this. Do you think Christ wanted this?

Do you think Our Lord wanted us to exalt the papacy to the point at where it is at now - beyond the limits of power any one man can and should hold? To the point where these limits are extremely liable to abuse by bad men?

Do you think Our Lord wanted us to prove those who split off from His Church - the Protestants - right in their accusations of papolatry?

I can't say with any absolute certainty. But perhaps we have Francis on the seat of Peter to teach us that we should put our trust not in princes nor the pope - indeed, absolute monarchs - but in God first and foremost. Of course, we would need to remain in His Church, but we would need to also remember the Pope is there to serve Christ. Not the other way around. The pope's humanity remains with him his entire life.

Perhaps this is also why He permitted the separation of Church and State, to remind us that what is God's is God's, and what is Caesar's Caesar's.

Remember, man determined the extent of the powers we see in the papacy today, not God.

Let a past Pope, Benedict XVI, speak to us about the dangers of treating the pope like an absolute monarch. 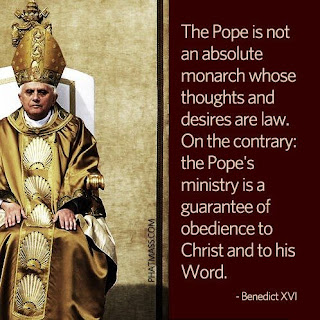 [S]cience alone cannot provide us with a definitive and binding interpretation; it is unable to offer us, in its interpretation, that certainty with which we can live and for which we can even die. A greater mandate is necessary for this, which cannot derive from human abilities alone. The voice of the living Church is essential for this, of the Church entrusted until the end of time to Peter and to the College of the Apostles.
This power of teaching frightens many people in and outside the Church. They wonder whether freedom of conscience is threatened or whether it is a presumption opposed to freedom of thought. It is not like this. The power that Christ conferred upon Peter and his Successors is, in an absolute sense, a mandate to serve. The power of teaching in the Church involves a commitment to the service of obedience to the faith. The Pope is not an absolute monarch whose thoughts and desires are law. On the contrary: the Pope's ministry is a guarantee of obedience to Christ and to his Word. He must not proclaim his own ideas, but rather constantly bind himself and the Church to obedience to God's Word, in the face of every attempt to adapt it or water it down, and every form of opportunism.