Sorry, Pope Francis: Atheism is not the solution 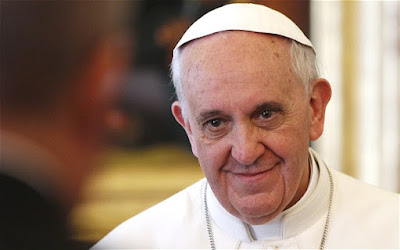 The Catholic Church has not even reached the feast of the Epiphany - and its leader has gaslighted its faithful.

When will it end, this writer asks?

As our fellow blogger at Vox Cantoris writes, at his first General Audience for 2019 AD, Pope Francis said:

"How many times do we see the scandal of those people who go to church and stay there all day or go every day and live hating others or talking badly about people? This is a scandal - it is better not to go to church: better to live as an atheist."


Can the man we term the Vicar of Christ not see the danger within the statement he is making?

Granted, the Pope is correct in terming those who "live hating others or talking badly about people" as causing "scandal." We can all attest to that. However, Pope Francis is entirely incorrect in stating that in order to avoid such scandal, it is "better to live as an atheist" - nay - "better not to go to church."

Frankly, atheism is not the solution to stop the scandal of gossip and living life hating others. It is extremely unbecoming of the leader of the Church to suggest that the only means of stopping scandal is to leave the Church he leads, for that is what atheism entails.

Atheism is not only plagued with the same ills of gossip and living life hating others as the Catholic Church is. It is also a poor solution to stop scandal, for it is only when we immerse ourselves in Christ - who is the Church - that we are given the graces to both resist and refuse to perpetuate scandal.

The Church is a wonderful salve to end scandal, despite it being plagued by scandal in its human element in this time. Atheism cannot replace that. Personally, I can confirm - from living with two open atheists myself - that when you embrace atheism, it fails to fill the hole that is left behind when you reject God and His Church. You turn to other material things to fill the hole. Alcohol. Drugs. Sex. Material culture. It is extremely painful to see, not only because you can empathize with their pain, but also because you bear the brunt of their contempt of the Church and anger toward God as someone in the Church ... and you know what better option there is for them.

When that ends up not being enough to fill the hole, and they realize it, atheists have two options. Either attack those in the Church, or come back to the Church. Plenty do on either side. Some never come back, so filled they are with anger and spoon-fed lies.

So, Pope Francis is playing a dangerous game by stating one is better off if they are an atheist. Half of me hopes he sees it. But in light of despairing statements he's said before about sincere and faithful Catholics - coprophagia, anyone? - one has to wonder at his own sincerity and motivation for saying such a thing.

What is his endgame? So early in the year, too?

Atheists - come home. Despite what our Pope says, you ARE NOT in the right. You are in the wrong, soulfully wrong.
Posted by Irenaeus at 20:36

The Pope's words, if accurately translated, are indeed dangerous. Very dangerous. We live in a world saturated with the grave danger of religious indifferentism. This leaves a confused person thinking, "well, I am better than that sinful Catholic, because he should know better". This is all true, but it does not HELP the atheist.

Sinful Catholics certainly are a problem, but separate from this one. Vox Cantoris only recently outlined but a few names of many, many more who are all damaging the Catholic Faith by abusing social media.

The wayward Catholic goes to Hell; the not invincibly ignorant atheist goes to Hell.... so how does any good come from this?