What is it with Twitter and the promotion of narcissism?

In recent days, the Catholic Twitter-verse - so-called - has been rocked by earth-shaking debates, wholly insignificant in the grand scheme of things. Several Twitter-priests have taken the Catholic faithful to task over their conduct on Twitter - while also engaging in questionable conduct themselves.

One priest even went so far as to scold the faithful by reminding them that if a priest blocks them - that is, prevent them from seeing their Tweets and information - it is likely the faithful's fault. However, in doing so, he implied - if not openly admitted - that he was a fan of the blocking function. 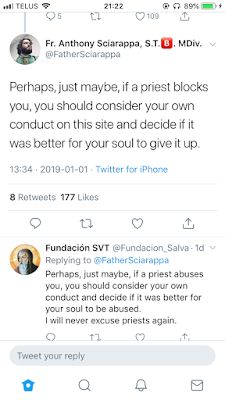 He ended up confirming his admiration in a later tweet, despite the jesting tone. 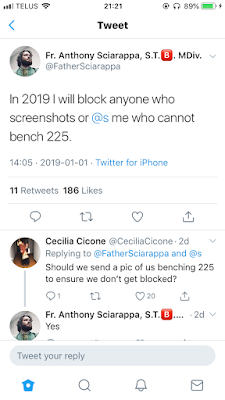 As an added insult, this same priest also decided, instead of merely having his name as his screen name, he would also add S.T.B. and MDiv to it. I cannot read this man's intentions, but this stinks of narcissism to me. There is absolutely no need to add what degree/diploma you have received - especially in an online forum - unless you are asked directly. There is no indication that he was asked to.

Is this how a priest - an in persona Christi - behaves?

Does he freely block and use it to teach the faithful a "lesson"?

Does he add his degrees to his screen name?

Finally, does he pander to the culture and frequently reference it in his timeline? Does he pass himself off as a "cool priest'?

No, of course not.

A priest is counter-cultural - he fights against the culture and offers the world a refreshing alternative to the world in the Mass.

That is not to say a priest cannot use Twitter and other platforms appropriately. But when he engages in questionable behavior, perhaps he should rethink his use of the platform. The laity are held by other laity to a standard - but we laity as a whole hold the priest to a higher standard than that, because he is an alter Christus.

When he betrays us, it is worse than when another lay person betrays us.

We need holy priests, priests in the image of Christ, not priests who use social media to promote their ugly sides and act like bad priests toward the faithful. Fr. Sciarappa is only one such example on Twitter.

Priests - if you use social media like this, get off.

Email ThisBlogThis!Share to TwitterShare to FacebookShare to Pinterest
Labels: Catholic

The problem of clerical narcissism is a grave one. As a friend of mine once told me, regarding a prominent clergyman's activity on social media. "Fr ------ told me, 'I don't know where he finds the time, I have a parish to run'"