When will the culture of silence and violence regarding the clerical state end? 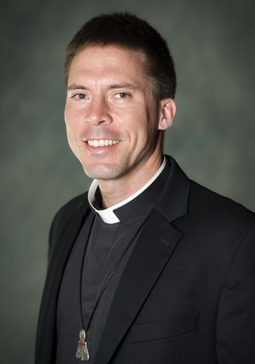 In yet another instance of "ferme la bouche" or face severe penalties, Fr. Mark Goring, of the Companions of the Cross, has been asked to "cease and desist" his actions exposing the rot of the Church after posting a video on his YouTube channel calling for the resignation of Cardinal Wuerl from his posting.

Fr. Goring has taken the video down, but has since posted two new videos, one directly in response to the command to cease and desist, and another about his first Latin Mass.

(Update: The "Cease and Desist" video has been removed from YouTube.)

And may those who seek to silence him be brought to their knees by repentance before they die.

God will not be mocked.

Please support Fr Mark Goring, defender of the true Church. Pray for his safety. God will not be mocked, in Jesus name amen.

Tony T said:
We were warned by Our Lady of Good Success, Catherine Emmerich, Garabandal, La Salette,Akita.....SILENCE! The bulldozer Church forges on, the remaining few churchgoers kept ignorant. The conspirators, whoever we think them to be, are not concerned by hellfire [which they even try to convince us, does not exist!]. The Church WILL NOT be destroyed, buoyed by the 'Faithful Remnant'. For 40 years I have known 'traditional' priests sent to Siberia!

Fr. Goring, in my humble opinion, I think it is good to obey the cease and desist order of the Church. Many saints also came under such injunction, and they obeyed without exception. In the end these injunctions always worked in favor of the saints. I see hand of God at work here.

I'm writing this short message for Father Mark. I had not kept up with his videos since the one of his surrender of calling for reform or at least justice on abuse incidents of the church. I turned him off when he said he would obey his superior. I pity father for unless he's again standing up and I have missed that video he will be asked by our lord what have you done for my church! As we know when we are judged we will not speak. We will only listen. The early POPES told us if someone is trying to do wrong and not teaching the ways of the church you are to disobey that person even if it is a POPE. It is you obligation and duty to do so. Father Mark said he was obeying his superior. Who Father is your Superior. Only one. Those who are given much are expected to give back much more.

Gabriel, I agree with your comment completely. My prayers are with Fr. Goring, for he is being severely tested at this trying time.