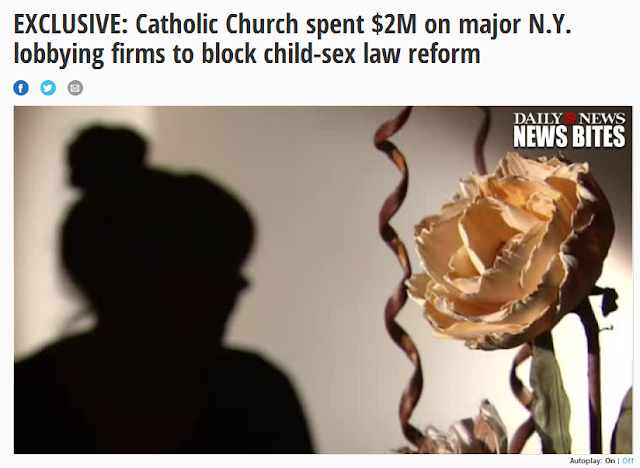 What would you think of a person to whom you gave money for charity, but found out they were using it to protect pedophiles?

The following link carries an interesting report on the US bishops' ongoing obstruction of justice.

Now to just two examples of how bishops are misusing millions to protect pedophiles.

The decades long abuse of boys in the Diocese of Altoona-Johnstown, Pennsylvania, sees not contrition, not sorrow, not amends, but millions being spent by the bishops to block changes to the State laws regarding statues of limitations. Are you aware, dear friends, that across the USA, your bishops' conference is spending tens of millions on lobbyists? There have even been cases of people who stand up against these chruchmen being publicly denounced from the pulpit! Yet these same Judas-priests and Judas-bishops continue to cover for men who sodomized and brutalized the most helpless, and never once denounce from the pulpit these vicious, sadistic, sodomite rapists!!

The abuse of children in New York has seen Timothy Cardinal Dolan swing into action. Not to remove perverts, not to call in the police, not to make amends. No, the laughing Cardinal has spent over $2 million dollars to try to fight laws that would go after perverts! He even hired Rabbi Hank Sheinkopf to lobby for him! It should be noted that Sheinkopf also worked for Andrew Cuomo, all the while as Cuomo boasted of his LGBT agenda.

From the New York Daily News:


Not leaving it to divine chance, the state Catholic Conference has turned in recent years to some of Albany’s most well-connected and influential lobby firms to help block a bill that would make it easier for child sex abuse victims to seek justice.

The Catholic Conference, headed by Timothy Cardinal Dolan, has used Wilson Elser Moskowitz Edelman & Dicker, Patricia Lynch & Associates, Hank Sheinkopf, and Mark Behan Communications to lobby against the Child Victims Act as well as for or against other measures.

All told, the conference spent more than $2.1 million on lobbying from 2007 through the end of 2015, state records show. That does not include the conference’s own internal lobbying team.


Why this aggression against the victims and parents?  Simple: these bishops love money more than they do truth. Many of them are also homophiles and are covering for their homosexual friends, if they themselves are not homosexuals.

These bishops are well aware that law changes will see hundreds of convictions against pedophile-priests and more dioceses going into bankruptcy. (This may be why many dioceses are also spending millions to hire professional fund-raising firms to go after your hard earned money).

Friends, if you are donating money: STOP!!!

The good news is, that 15 dioceses in the United States have already declared bankruptcy.

May 2018 see many more dioceses going into bankruptcy!
Posted by Barona at 09:36

I agree with the thrust of this, but there is just one problem. The bills extending the statute of limitations do not apply to public schools. I think that this is the basis of the Church's objection: the Church is being singled out for special treatment.

Vile, vile, and perverted. There was no change to seminaries in light of what we know now about homosexual predators who pose as priests and bishops to gain access to boys and young men. It is almost intolerable to continue to read "pedophile" since we know this is not the biggest threat, which remains, homosexual predator priests! If 81% of the victims of priests and bishops are boys and young men between the ages of 11 and 17, then by definition this is not pedophilia. Regardless, our bishops are not going to do a single thing about it, and while we wondered in the 80's and 90's why, now we know, it's ok with them.
God deliver us from these evil men, who care more about their comforts and coffers than they ever did about God, the church, the flock, vulnerable boys and young men.

To stop victims from seeking justice, explains why the Church in Canada has done essentially nothing to stop the radical and abusive sex curriculum that has entered Canadian schools. It's an attack on the health and safety of innocent children. The explicit content will corrupt souls. And the bishops and local parishes have been silent. What a scandal!

The extension of the Statue of Limitations applies to EVERYONE. It has to do with AGE only, not who abused the victim