Joseph Sciambra: a Voice of Catholic Truth in an Age of Sexual Madness 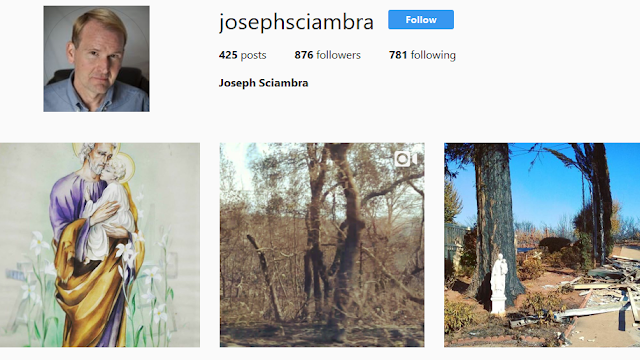 In the San Francisco area lives a humble man. I would say holy, but I know Joseph Sciambra would be repulsed by that claim of mine. Better yet, let us say Joseph (as well should we all) seeks after holiness. The other week he lost his family home to the terrible California fires. He lost virtually everything. Joseph, for those of you who do not know, lived a homosexual lifestyle for many, many years. He struggled with this horror, this hell on earth.... finally he returned to Christ.

During the time when he was a slave to the devil, he did not make millions, he did not play the prophet ("profit"), he did not talk about virtue and openly boast and live a life of sin. No, Joseph struggled, and was finally brought to Our Lord through a true conversion.

Contrast Joseph to Milo Yiannopoulos. The latter has made a very considerable amount of money - and continues to do so - on so-called "conservatives" and other fools who cheer him on, pay him money, who lap up his sanctimonious and poisonous words. That so-called Catholics and Christians who would listen to this man, only reflects how successful the "gay liberation" movement became; how desensitized and accepting to sexual perversion people have become.

Catholics should explore the Instagram feed of this charlatan and man who is totally under the control of Lucifer. The old adage that every picture tells a story is true. You will see that sin leads to insanity. A Faustian game to seek fame and fortune does not end well. Homosexual narcissism literally drives the person insane. 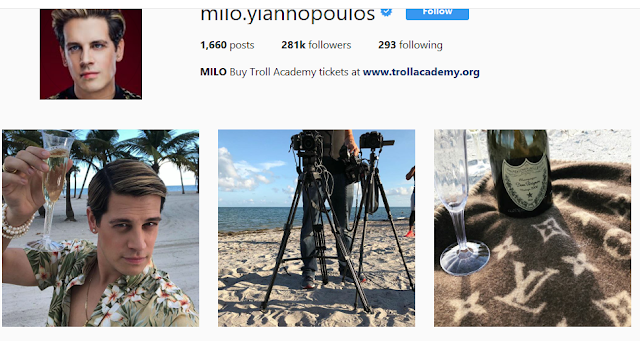 Unlike Milo, Joseph does not seek controversy, nor does he vainly dress up and decorate himself. Nor does Joseph copious quote saints and scholars. I am reminded that the devil himself is a scholar par excellence  and - for that matter - known for quoting Sacred Scripture. No, Joseph does not reek of pride. Joseph does not chase money, or the limelight. Joseph during his life of sin, lived in shame, in abandon, seeking out Our Lord. Joseph did not come from privilege, and even worse, abuse it. Joseph's parents could not afford $50,000 per annum for school tuition. What they could afford was constant prayers for their son's conversion.

Friends, this Milo thrives on controversy. I only write this to draw your attention to the incongruity of those who claim they oppose the Sin of Sodom, yet still listen to the evil, siren voice of a deceiver. For those who wish to know what sodomites do, they can consult Joseph Sciambra.

Friends, every practicing sodomite, needs prayer. Desperately. This particular sin is held by God to be so vile, that rightly St. John Chrysostom referred to the activity of sodomites as "hell appearing before its time". It is for sins of the flesh that most people, according to Our Lady of Fatima, go to Hell.

Let Milo convert, abandon sodomy, let him give his money away to charity - perhaps the suffering in the Third World? Let him disappear and do penance for his horrible sins.

Perhaps we should end this reflection with the words of Joseph Sciambra on the ever increasingly insane and suicidal - physical, psychological and spiritual - road that the pathetic homosexual travels?

Finally, there was nearly nothing I wouldn’t do, but, I kept finding myself empty-handed. Towards the end of my imprisonment inside of “gay,” what was left that could possibly excite me? Yet, this experience is pervasive within the “gay” male community; hence, the dramatic and extremely ugly base-line of debauchery which exists within male homosexuality and has no corollary in the heterosexual world; for instance, when I was unconsciously checking out of “gay,” one of the last major sex parties I got into involved a single passive man and several insertive males; at the time – this was considered, even within “gay” circles, incredibly shocking. Almost 20 years later, another young man, again in San Francisco, agreed to have a gallon of semen, collected from various anonymous donors, injected into his rectum. No woman, unless psychologically ill, would ever submit to such a thing; this is because the same male mind that can contemplate the beauty of the Sistine Chapel ceiling can also construct a nightmarish corridor to ultimate degradation. And, in this subjugation, all is revealed – as homosexuality has always been a road to nowhere. Recently, gay millennial blogger Milo Yiannopoulos said: “I can’t get off unless they have a gun to my head.” This statement, though hyperbolic, is still incredibly revealing; for it shows the eventual end of all homosexuals desires: a wasteland of unfulfillment that irreversibly becomes self-destructive.

Catholics, friends, we need to carefully access whom we follow on social media. We also need to very carefully access ourselves, lest we fall into grave sin. We must realize that what we write may influence souls. During this time of horrible confusion, we need to console Catholics that Christ is in control of His Church and that Pope Francis needs our prayers more than any other person alive. Where we may be hounded by one demon, Lucifer may assign thousands of demons to tempt the Pope and his handlers.

Permit me to add a word about the unrelenting deviousness in the placement of this Milo character at the head of the parade of ever-hapless political conservatism.

His presence in the mind of the media consumer is a weapon by which dutifully obedient, herd-following political conservatives make meaningless any personal profession of adherence to objective morality.

I've read thoughts like the following spewed from Catholics online, "no, I don't support his lifestyle, but I think he says a lot of the right things."

That is precisely why this Milo person does as he does, to bait political conservatives (whose movement has NEVER ONCE put the Revolution to flight)
into accepting a person whose morally unacceptable conduct is overlooked because he says things that the conservative media consumer likes. And so the conservative media consumer, with 60+ years of straight losses, desperate for a sign that his side is has at least some ray of hope of winning something, will compromise fundamental adherence to natural law because he's been presented with a conservative-sounding notorious public sinner. How can Catholics fall for this?!

As a kid I remember the Harlem Globetrotters, an exhibition basketball team that delighted crowds with skill and antics. As foils to the style and skill of the Globetrotters were a lackluster bunch of opponents called the Stars. The Stars, according to script, always lost. After two and a half generations, conservatives (way to many Catholics among them) still can't figure out that they're rooting for the Stars, politicians, writers, speakers and all the rest, who are following a script which never changes. Will the awakening ever dawn?