Did Cardinal Cupich just ordain a homosexual to the sacred priesthood? This question may be seriously asked about his ordination of Michael Rossman S. J.

Rossman is publicly known for openly dissenting against Catholic teaching on homosexuality. What other message is Rossman S.J., sending? That he only supports, defends, encourages others to engage in unnatural sexual vice?

This would still be more than enough to have expelled him from the seminary. 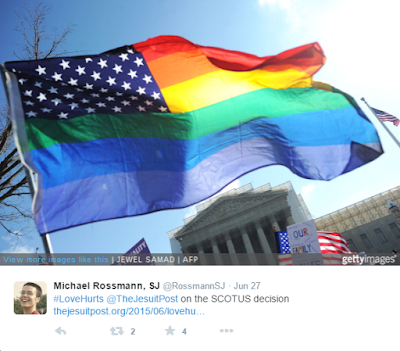 I have dealt with Rossman before, when he wrote an article praising the psychologically disturbed singer, mocker of the Catholic Faith and active bisexual, "Lady Gaga".

Rossman, like so many other Jesuits, openly supports the US Supreme Court decision on so-called "same-sex marriage".

So, just who is this Michael Rossman, S.J.?

How can he not, if he supports "same-sex marriage"? 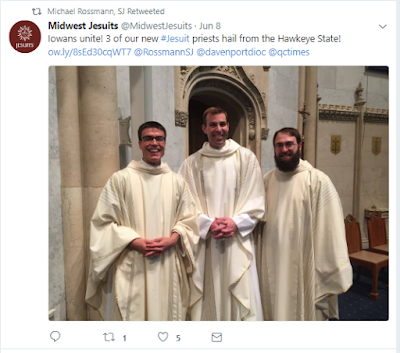 Cardinal Cupich: you did not do due diligence in discerning if Michael Rossman S.J., should be ordained. Rossman's dissent is public and with full knowledge of his Jesuit Superiors. According to Canon Law (1029), Rossman's ordination may be valid, but it is certainly illicit.
Posted by Barona at 08:55

Cardinal Cupich is my Cardinal. Pray for me and all of us in Chicago. Cardinal Cupich himself is at the very least 'soft' on the homosexual issue within the Church. That's at THE VERY LEAST. Cardinal Cupich is one of the 'inclusive' Cardinals that believes and even invites active homosexuals to the Eucharist. He's a 'Francis Cardinal' through and through as evident by Francis choosing him PERSONALLY for Chicago after Cardinal George's death. Lord Jesus, please end this nightmare that we are living in real time, soon!!

This newly ordained priest is listed on the bulletin as a weekend assistant at St Mary of the Annunciation Parish in Melrose Mass .... To make matters worse, there is a grammar school attached to this parish. Shandley is released from prison, I wonder if he will be making a return to Boston.