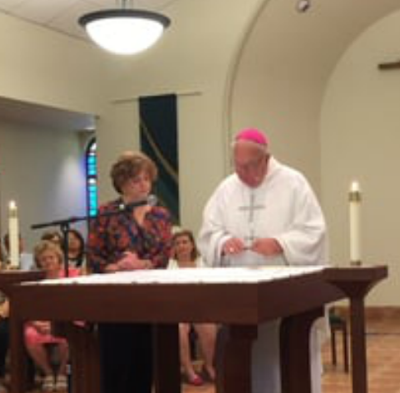 Neo-Modernist and homosexualist Bishop Robert Lynch of the Diocese of St. Petersburg, Florida (who has been reviewed in a generally positive light by the extreme-pro-homosexual militant group, New Way Ministries) wrote the following. The bishop has forgotten the spiritual works of mercy: to instruct the ignorant, to admonish sinners...

We read of no call for the conversion of homosexuals, no fraternal admonishment. Instead we have homosexualist language, the insinuation that the Catholic Faith "targets" people who engage in grave sexual sins, the confusing of Being and Acting (forgetting that what a person is, is different than what a person does). Yes, all men are created in God's image and likeness, but  through sin, stain and darken this image. Not ONCE did Bishop Lynch use the word "SIN". One may ask the deluded bishops: perhaps the Pulse "nightclub" was for chaste homosexuals who belonged to Courage? If it was, perhaps Bishop Lynch should let us know, so we can support their families.

The bishop speaks of the "faithful departed" who were slain. From what I understand the "faithful' of the Catholic do not frequent homosexual bath houses to commit perverted sexual acts. Perhaps Lynch should do two things: identify these "faithful departed", and explain to Catholics why he has refused to admonish sinners who engage in unnatural sexual behaviour.

Today I write with a heavy heart arising from the tragedy which occurred in the early morning hours yesterday at a Gay, Lesbian, Transgender night club in Orlando, our neighbor to the east...

Second, sadly it is religion, including our own, which targets, mostly verbally, and also often breeds contempt for gays, lesbians and transgender people. Attacks today on LGBT men and women often plant the seed of contempt, then hatred, which can ultimately lead to violence. Those women and men who were mowed down early yesterday morning were all made in the image and likeness of God.

...Singling out people for victimization because of their religion, their sexual orientation, their nationality must be offensive to God’s ears.

....may the souls of those faithful departed who met their God early Sunday morning rest in peace.
Posted by Barona at 21:26

"You will know them by their fruits." Jesus

Get a clue bishop.

The comments in the article reflect the sex-hating, sexually phobic attitudes that have prevailed in the church. This pervasive fear of sex, discomfort with sex, and discomfort with ever saying anything positive about sex and its pleasures lead people like the writer of this article to focus their discussions of sex on the kinds of sex and the kinds of desires that they are uncomfortable with, either in themselves, or in others, or both.

The Catholic church, among other churches, has repressed realistic open discussion of sexuality for, well, an obscenely long time. And this has led not only to hatred, condemnation, and rejection of gay people, but also to the church's decades-long attempt to hide and pretend that the hierarchy consists of celibate heterosexuals, when in fact it consists, almost certainly in majority, of non-celibate heterosexuals and non-celibate homosexuals. Also, in its grand denialism, the church has harboured hundreds, and more likely thousands of men who have sexually abused children.

So, what was it the first commenter said? Oh, yes, and right back atcha, friend in Christ: Get. A. Clue.