The inconsistency of Archbishop Wilton Gregory

On Tuesday, American president Donald J. Trump visited the Saint John Paul II Shrine in Washington, D.C. with his wife Melania, both to pay their respects to the man and issue an executive order on religious freedom in the United States. 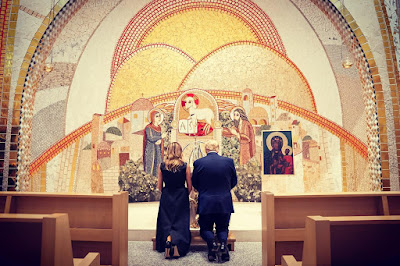 This visit had been planned for months, long before the riots currently underway in America began.

Despite this, D.C. Archbishop Wilton Gregory strongly condemned the President's action in a statement, even going so far as to call it "baffling and reprehensible that any Catholic facility would allow itself to be so egregiously misused and manipulated in a fashion that violates our religious principles."

Leaving aside the mere absurdity of the statement - Gregory has time to compose an attack against his President while he could be working to implement measures to reopen the churches under his jurisdiction? - I want to note that Wilton Gregory is not being consistent.

In late September last year, pro-abortion journalist Cokie Roberts died and was given a grand Catholic funeral Mass at the Cathedral of St. Matthew the Apostle, the Catholic cathedral in Washington, D.C. Gregory presided at that Mass, despite the clear statements from the Church that anyone who promotes abortion in a public fashion is automatically excommunicated, and does not have the dignity of a Catholic funeral. At that Mass, he waxed glowingly about Roberts, calling her an "extraordinary, professional servant of the truth, [who] believed in God's word ... accepted it and fashioned her life around that word."

At that same Mass, well-known Catholic pro-abortionist Nancy Pelosi gave a similarly glowing eulogy about Roberts, where she called the deceased "a national treasure." 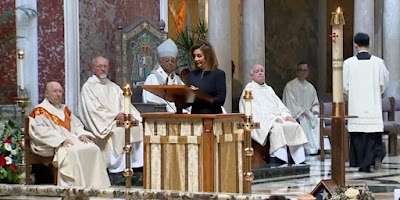 Archbishop Gregory, where was the bafflement and reprehensibility when Nancy Pelosi "so egregiously misused and manipulated" the Catholic lectern "in a fashion that violates our religious principles?"

Where was it then? Why is the outrage and disgust only coming out now? (I need not mention that you failed then to extend those same sentiments to yourself.)

You're not being consistent, Archbishop Gregory. One could even call you a hypocrite.

As for President Trump, I note that he has been expressing a growing appreciation towards S. John Paul II for some months. I suspect Melania is working on him, similar to how S. Monica worked on S. Augustine. In all likelihood, he could become Catholic at some point in his life.

When Trump dies, it could very well be that he is greeted with a hearty "well-done" while Gregory and Pelosi are denied that same grace.

May God bless Donald J. Trump, and offer the chance of repentance to Wilton Gregory and Nancy Pelosi.
Posted by Irenaeus at 12:52

How in God's holy name was Nancy Pelosi allowed to stand so close to the altar, and recite a love letter to Cokie Roberts, who approved of child killing?

It seems the Catholic Church in America is determined to dismantle her own moral authority in order to whore after political and media approval.

Now Wilton Gregory attacks President Trump and the First Lady for kneeling in prayer at the Saint John Paul shrine? My late Catholic father would be saying to Gregory, *What has gone wrong with your mind, Archbishop?*

Is anyone still in doubt that there has been a modernist takeover of the Church? The bishops are like blind Pharisees leading the blind laity.

Wilton Gregory is but another voice of subversion adding fuel to the fire of insurrection. He has the questionable “honour” of joining the pro-abortion bishops in denouncing Trump’s first public acts of recognition that he cannot deal with this crisis without God’s help. The lady time I checked Melania was a Catholic. Who is Gregory to deny her access to a Catholic shrine?

Even Pope Francis was far more courteous when he greeted them in Rome. By refusing to meet them Gregory given his position of influence is engaging in subversive activity, encouraging sedition against the constitutionally elected president. He and all his ilk are very lucky they are not dealing with Lincoln,

You go to the heart of the matter even though you will make many enemies for saying so.

*The nation's capitol is plagued by false shepherds* Archbishop Vigano.

The late Fr. John O'Connor recorded an outstanding cassette about 25-30 years ago: "The American Church: A Severed Branch".

Needless to say, his Superiors suspended him, then expelled him from the Dominicans. His appeal to Rome failed as there were already back then too many homosexuals who were backing up his persecutors.

Fr. O'Connor has since gone to his eternal reward.

I remember your earlier post on Fr. John O'Connor. That the Dominicans expelled him shocked me. That his appeal to Rome failed was even more shocking. Most lay Catholics remained ignorant of the moral shift that was taking place in the Dominican order, or inside the Vatican.

I am reading again a favourite book *Jew and Greek* by Dom Gregory Dix published in 1953. It carries a foreword by the Abbot of Nashdom to whose abbey Gregory Dix belonged. *At the time of his death in 1952 Dom Gregory Dix left behind the manuscript of this book,* the abbot writes.

What would the Dominicans of 1953 have thought of the corruption that would take place in their order? Gregory Dix's short book opens unforgettably:

'Early in the sixties of the first century A.D. a Jew, writing self- consciously as a Jew to a group of Gentiles, declared that *Now in Messiah Jesus you (Gentiles) who were formerly far off (from us Jews) have become near (to us) by the blood of Messiah. For He is our peace (with each other) who has made us both into one and pulled down the dividing wall of division between us, having destroyed in His flesh the emnity (between us).'

From Paul's Letter to the Ephesians reconciling the Gentiles to Jews, *and one of the decisive turning-points of human history,* writes Gregory Dix, *the emergence in history of the Catholic Church, with all the vast differences that has made, and still makes, in the flow of universal history.*

In the midst of highly organised terrorist riots in the United States, Archbishop Vigano sends an open letter to President Trump. A coming post for Toronto Catholic Witness?

Nobody could be less conspiracy minded than me.

But it looks as if the Deep (anti-Christian) State is working hand in glove with the Deep (Anti-Catholic) Church and the Deep (Marxist-minded) Media. No wonder the President feels embattled. He can't do anything right with these people. This is their chance to tear him down and get Biden elected.

Christian mothers who protested about the drag queen story hour in American schools are expelled from social media. It may seem a small thing in the light of the violence and looting in American cities. But it tells you something about the way things are going. And it's putting a leering grin on the face of Baphomet.

Let's speak up now before we are all dragged away to indoctrination centres, Chinese communist style.