A word about Michael Voris and Christine Niles 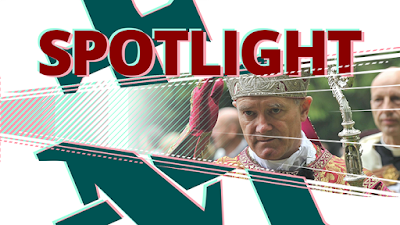 The other day, I read a rather piercing article by Church Militant (CM) on the strange silence from the self-proclaimed Catholic media on the evidence-backed allegations of sex abuse within the Society of St. Pius X made by CM, appropriately titled Why the silence, trads?. I thought it made some good points. I think it is something we should be asking more of what has been called Trad, Inc, as well as whether we ourselves put too much trust in princes. (I have linked to a transcript by another source.)

However, what is perhaps more piercing is the relative noise about Michael Voris and Christine Niles. Ever since the year-long-in-the-making Spotlight about the Society's covering up of sex abuse within their ranks aired over a month ago, the amount of attention given to both Michael Voris' and Christine Niles' character has skyrocketed. To be more precise, the amount of gossip and calumny about their character, professional lives, and personal lives has risen to a point where I must comment on it. It is simply untolerable.

When the Spotlight first aired, this "commentary" on both Voris and Niles was one of the first reactions I noticed. It was, and still is, unbelievable. On the one hand, there were people bringing up Michael Voris' past as a homosexual (which he has since repented of - publicly), and using it to make extremely negative inferences with regard to his character and professional life. I will admit there is substantial bias against the SSPX in the original piece that could have been edited out, but does that warrant the gossip and calumny towards him? I think not.

With regards to Christine Niles, I find it reprehensible that men are speaking to a woman in such a way that it denies their supposed piety and manliness. Many of these men are firm adherents of the Society. What on Earth does Mrs. Niles' marital past have to do with the investigation at hand? Why do you - a man - have the need to call her names and ugly words that I won't repeat here? Seriously, men - do better.

I have also found it extremely interesting that the lay supporters of the SSPX have taken it upon themselves to conduct in-depth investigations into not only Michael Voris and Christine Niles, but CM as an organization. (Why not investigate the SSPX?) According to these new-found journalists, apparently CM is funded by organizations that are hostile to the SSPX and Tradition and want nothing more than to see it gone. Forgive me, but I find that spurious. CM went on record saying that these allegations are not true, and I am inclined to take them at their word. New journalists who attend the SSPX, I am sure CM would love to hire you as part of their staff. Your skills could be put to good use.

At the end of the day, stop shooting the messengers. You may not like them, but Voris, Niles, CM, and their associates have not done anything wrong to you. They are reporting what they have found, and charity obliged them to. The truth is what matters. Not CM vs. SSPX. Or settling your score with Michael Voris or Christine Niles. The truth, and only the truth, matters. I thought we were in search of that together?

Leave them alone. Let them report what they have found. You are free to disagree with what they have reported, if you so choose. You can even point out what you find lacking in the evidence presented - we function in a very open forum, after all. (Personally, I find the evidence hard to deny or pick apart. There is also the reality that CM has been proven right time and time again.) However, the law of charity obliges you to hold your tongue from gossiping and calumniating about others.

In the meantime, please remember the victims. I have listened to some of the evidence presented from the side of the victims. There is a lot of pain and sorrow there, and I admire their courage. To open up about abuse and take name-calling as a result is not an easy endeavour.

Please pray for them. The victims are so often forgotten in cases like this and shunted off to the side.
Posted by Irenaeus at 14:16

Email ThisBlogThis!Share to TwitterShare to FacebookShare to Pinterest
Labels: SSPX

Just curious. I noticed you take defenders of the SSPX to task for their conduct, but say nothing about the conduct of Voris and Niles in condemning anyone who defends the SSPX as a 'pedo-enabler", among other names. Also, why are Voris & Niles so obsessed with the SSPX, while being silent on sexual abuse cases in Opus Dei, which have actually been tried in a court of law? There have been 1 or 2 that I've heard of.

Let's be serious. Most of these stories about the SSPX have been around since at least the 90's, usually recounted by people who somewhere along the line decided that the SSPX was not their cup of tea for whatever reason, or who realized they weren't going to have much of a career working for them, or who just wanted to score points with the "conservative catholic" establishment. If any of these more recent claims are to be taken seriously, why don't the alleged victims go to the police, whether local, sherriff, or state?

The bottom line is this. Sexual abuse, no matter who perpetrates it, needs to be exposed and punished, period. At the same time, people who overstep the bounds of charity and hide behind a shield of "Oh, but I'm exposing sexual predators, I'm the good guy here" while focusing on one group to the exclusion of others, like Opus Dei, or even the FSSP, or the ICK, or any other group; and while protecting a guy in his own group who was peddling a pornographic video game; not to mention hiding his own lifestyle until he was about to be exposed (repentant or not) are not the kind of people to take seriously.

Even Chris Hanson of NBC To Catch a Predator fame was a far better example of charitable conduct. Hanson, to his credit, always made it clear that the people who were accused of sex crimes were innocent until proven guilty in a court of law.

Voris & Niles see the entire SSPX as guilty, and no evidence will EVER be enough to exonerate any member of the SSPX from their witch hunt. On the other hand, maybe I'll be proven wrong...

One last point. Where can I find the trial transcripts for all these supposed sexual predators in the SSPX who have been tried and convicted?

Your thoughts and commentary is calm and cogent. I am also aghast at the unjust criticsm of Michael Voris and Christine Niles. I know them both, it is unjustified. I also don't agree with Michael's anti SSPX rhetoric and this has hurt him in the eyes of Trad Inc.

The simple fact is; a pervert's a pervert no matter how "Trad." If the SSPX covered it up, they must be denounced just as we did with McCarrick. If that causes me to lose friends here in Toronto or online, so be it.

The critics of Voris have forgotten the victims.

While following this conversation with interest, I have no competency to make any contribution.

Without questioning what Shawn Albert said, I should point out that Church Militant staff have NOT been silent on Opus Dei; they said they had *tempered* their admiration for Opus Dei in the light of some worrying accusations; and that no staff member of Church Militant belongs to Opus Dei.

Voris hurts his message when he engages in over the top rhetoric and even excessively strident language. He also undermines his position of only seeking the truth about abuse when he interjects commentary on the canonical status of the SSPX which he knows to be false. The status of the SSPX is irrelevant to the subject at hand, so why does he interject it? Readers can draw their own conclusions.

It must ALWAYS be about the VICTIMS. But one thing is emerging from this: the SSPX seems to be infected with the 50s-ism virus of coverup, denial, move the pervert around etc. Fr John O'Connor years ago in his nearly two decade duel with homosexual Dominicans in the American midwest advised parents: don't go to the priests, the bishops - GO STRAIGHT TO THE POLICE. Immediately.

He is being proven right, time and again.

I am happy to see that like Vox, you are not taking sides ,rather , it IS about the victims. Sadly there are more victims than those who have been sexually abused.Some boys were bullied in Fr Hewko's Commando groups . Children died. Several drowned at n SSPX Camp . Four or five non swimmers ,lacking life jackets along with a non affliated youthful rescuer, drowned on the orders of Fr Cottard SSPX who put them to sea in a plastic dinghy to cross the English Channel. Fr Hewko and boys bereft of proper clothing and compass were rescued suffering from hypothermia off a New England mountain after worried parents called the police. We saw too many children bullied in the SSPX to, "toughen them up", just like the Hitler Youth.
Most Catholics are ignorant of the fact that Freemasonry in Germany and France put Nazi elitism into action for Hitler.

Anonymous: Correct. As other commentators have written, the victims have been forgotten in this spate. That should not have happened.

Yes the victims have been ignored and forgotten in this spate ......But why?
I think only people such as myself, who exited the SSPX, truly know why.
Simply put.they are a cultand for them their priests are so holy they can do no wrong. I remember when Urrutigoity was outed. Several fanatical women in the SSPX went ballistic that it just could not be .because He was a close friend to their own sspx parish priest , Fr Hewko.