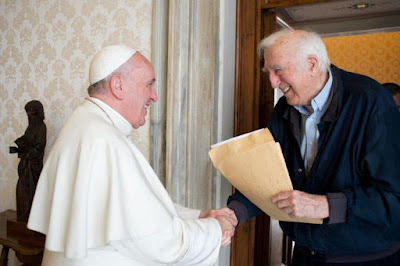 The Globe and Mail - perhaps the most calm and collected of Canada's national newspapers - has just revealed Jean Vanier, late founder and director of L'Arche International, is the subject of an ongoing internal L'Arche investigation into credible sexual abuse allegations.

You can read about it here.

When it comes to the younger Vanier, there have been whispers about him for years. Not the sexual abuse allegations, but how he wasn't the model Catholic he was made out to be. In 2016, as he was nearing the end of his life, he came out in support of euthanasia. Vox Cantoris records his reaction to the news here.

Growing up, I often heard about great Jean Vanier was. How he gave up a good worldly life to found an organization devoted to supporting those with intellectual disabilities - that would be L'Arche. In the Catholic school curriculum, in grades 8 through 10, there was at least one section in each Religion textbook dedicated to his life and his great qualities. There was an expectation that this is the sort of man I should aspire to be, and he was held in great regard by the Catholic elite here in Canada.

In retrospect, I suppose I shouldn't be surprised that was the case. After all, the textbooks were stamped with the seal of the Canadian Conference of Catholic Bishops, who will be infamous for years for writing the Winnipeg Statement.

The question is, now what? Already, I have seen people come out in "mourning" about these allegations. Others are questioning - rightly so - the prudence of naming public institutions after him, and I suspect they will lobby for a name change. Will L'Arche see a drastic reduction in financial support in light of this investigation?

I can only hope this prompts the Catholic school boards in Ontario to throw out those textbooks which make Jean Vanier out as a Catholic hero, preferably at the same time as they throw out those awful books Paolo De Buono peddles as "Catholic."

Jean Vanier: Model Catholic no more. If he had ever been.
Posted by Irenaeus at 11:00