Roma has entered a state of apostasy. Why are Catholics continuing with the same old nonsense? 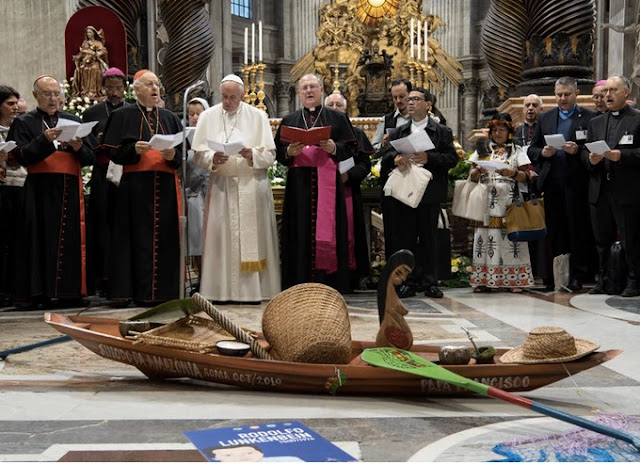 The last few weeks has been a watershed moment for many Catholics worldwide.

From October 4th onward, Roma has entered a state of open apostasy. Idols were openly venerated, worshipped, and prostrated to in the Vatican Gardens as opposed to Christ. The same idols - minus a certain male figurine - were brought into St. Peter's Basilica (either in statue or pot form) and a couple other places, with the same actions done there. All of this was done while heretical statement after heretical statement was issued forth from the intellectuals gathered at the Amazon Synod.

To add insult to injury, this was all enacted under the condoning gaze of Bergoglio, whose obstinate silence in the sight of open breaking of the First Commandment was a form of approval. It did not escape many that the "tree-planting ceremony" took place on the feast of St. Francis of Assisi, the name Bergoglio took after he was elected on March 13th, 2013. It was also quickly noted that the closing Mass of the Synod - which featured a certain pot of Mother Earth, the same idol present throughout the Synod - took place on the traditional feast of Christ the King. Once again, open defiance of Christ and His Kingship.

There is no other way to say it. For Bergoglio to openly gaslight the lay Faithful by committing idolatry under another guise is incontrovertible evidence he is an evil man.

Let me say it again. Bergoglio is an evil man. We have an evil man sitting on the Papal Chair.

It is truly awful to consider that in our lifetimes we have an evil man who has led the Holy of Holies - the Vatican - into a state of apostasy.

This is becoming plainly obvious to a growing number of Catholics. Even my best friend who does not go to the TLM has admitted to me that something is seriously wrong in the Vatican, and has noted that it is trickling down to the Church in Poland.

Roma is in a state of apostasy. We are under the auspices of pagans, unbelieving men, evil men. Men who will not stop until the Church of Christ has become the Church of Man.

Yet, Catholics are carrying on as though Roma isn't in a state of apostasy. They are continuing with the same old nonsense. While I understand that many people are possibly ignoring the apostasy in order to keep their spiritual lives intact, I have to wonder if that's really the case.

In the past week alone, I have seen supposedly "traditional" Catholics talk about Christmas music, Christmas shopping, harp on about Jews being the Christ-killers, the "existence" of Neo-Trads, and a host of other meaningless topics diverting attention away from the really serious problems in Roma and Catholicism worldwide. Openly. With no sense of shame.

But this is not the way to go about it. As I wrote some time ago, sometimes it is better for us to keep our mouths shut instead of opening it. We don't always feel better after we speak what we're thinking or planning to do with our time. It can also make us look really foolish.

So, Catholics, enough with the same old nonsense. We need to smarten up. Roll up your sleeves and get on with improving ourselves, our families, and making a home for Catholicism on Earth in the coming years in your own homes.

For these little homes may serve as the only remaining vestiges of the Church of Christ on Earth in the years to come, similar to priest holes in England. 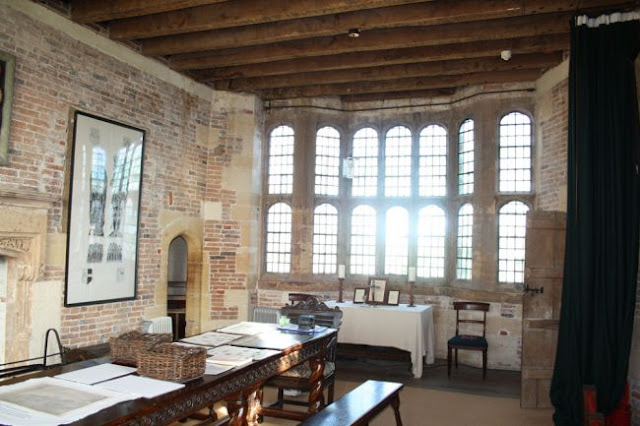 Email ThisBlogThis!Share to TwitterShare to FacebookShare to Pinterest
Labels: Crisis in the Church, Polish Catholic Media, Schism, The Persecuted Church

uh, but if he's an apostate dont we need to start going to sede chapels?

*Bergoglio is an evil man.*

I have to say I am shaken by your words, Irenaeus.

The Amazon Synod opened the door, both covertly and explicitly, to idolatry.
The liberal Catholic media is strangely untroubled by this abomination.

Did you not notice an uneasy expression on the faces of some of the clergy who sat on the platform before the world's media?
It was as if they were being swept along by some strong current they could not fight or fathom.
Others were just hacks going through the motions. Careerists with little sign of the supernatural priesthood in their bearing.

Idolatry is serious sin. A sin Israel committed again and again.
But does this make Bergoglio *evil*?

Certain casual remarks of Pope Francis suggest to me that he is in a state of mental disorder.

No lucid Catholic mind would countenance such remarks.
Certainly not from the chair of Peter.
As Michael Voris said, *clarity* has always been the hallmark of Catholic teaching, or it used to be before the Modernism muddied the clear waters.

Perhaps the shock of these last years - the sexual abuse crisis and the cover up, the homosexual depravity of many priests and hierarchy, the gigantic sums of Church money that have gone missing, the financial black hole in many parishes in America, the culture wars sponsored by the abortion industry and homosexual agenda, the gender ideology that has gripped the young at colleges and universities, the flagrant unbelief that now characterises Europe and north America - perhaps all this has broken Francis's mind.

We need to hear more from our soundest theologians, and from Cardinal Burke and Archbishop Schneider etc. They are our shepherds, we are not theirs.

We need to get down on our knees and say the Rosary for Pope Francis because as Michael Matt says, it is the Petrine Office that we are praying for.

Peter denied the Lord thrice, yet Peter was made the Rock by Jesus Christ.

Is it possible that Francis is an unconverted man?
Then let us pray for his conversion.

*There is more rejoicing in Heaven for a sinner saved ...*

Increasingly the Catholic Church in the United States looks like a sleazy and disgusting soap opera.

If Pope Francis does NOT speak out, if he does NOT enact immediate, drastic and radical reforms, then he is very much implicated in all this diabolical *evil*.

Pope Francis has the blood of souls on his conscience.
At his judgement Christ will say, *I never knew you, Francis. Depart from me.*

My late father, who died 20 years ago in communion with the Catholic Church, would be condemning Pope Francis for not acting like a Catholic.

My Dad would be saying to Francis, *Are you a disciple of Jesus Christ or a follower of Baal? Which is it, Bergoglio?*

How did we get here? What are ordinary Catholics to do? When will Pope Benedict act?

Pope Benedict HAS to act, even if it means breaking ALL the rules of Vatican protocol, and causing the mother of ALL media storms.

The Gospel of Jesus Christ is more important than the feelings of the sad misguided man who is seated in Saint Peter's chair.

To be honest, signs of this could be discerned by a child 60 years ago. I'm speaking for myself. It's a relief that it is no longer a dark, frightening, shame-filled secret. The faithful can now distinguish between true communities and Potemkin parishes. We may be small, but we know that the Truth gives us our freedom.

Also at the closing pachamama mass, there was no epicletic gesture.

Also at the closing pachamama mass, there was no epicletic gesture.

Problem is, with people like Bishop Barron and the general feeling in society that everyone eventually goes to Heaven, people don't think any anti-Catholic position is a big deal. Universalism is killing Catholicism.

An god idol in the heart of Catholicism. don't tell me the devil isn't winning.

The Ingress of Antichrist

I randomly reviewed the video from the closing Mass in St. Peter’s Basilica on October 27, 2019 to track the movement of the bowl of soil.
A witch dressed in white with the bowl was leading the procession before the Mass. Such a large procession looked like a green snake (green chasubles of the clergy) when it enters from the outside of the edifice and glides down the middle of the nave. The witch walked with this pot before the processional cross, because she represented the head of the serpent Pachamama.
However, during the offertory procession the witch with the bowl was walking at the very end. This time she represented the snake’s abdomen (tail). Why? Because as a viviparous snake, Pachamama laid Antichrist on the altar of the Lord! Jorge the Apostate* arranged this on the solemnity of Christ the King to show that now the Antichrist will reign in the Roman Catholic Church! The Apostate took in his hands this bowl only and ordered it to be put on the altar! Poor Marini placed the pot of soil next to the group of four candelabra. Normally, the altar is decorated with six candles, but when the ordinary bishop arrives, they will set up a seventh one. This seventh candle stands for Antichrist this time, the new host of Rome. This is how Antichrist’s public ingress took place! After the celebration, the bowl of soil remained on the altar, symbolizing the presence of the new lord of Rome. Antichrist is nothing more than an impermanent clay with an admixture of satanic malice and cunning. Scattered plants in this pot illustrate his twisted thinking.

*His dark crosier, probably wooden, looks like a dried snake.