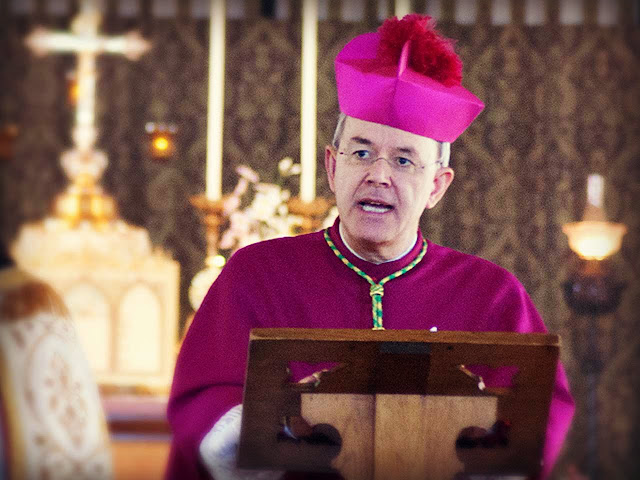 In what Maike Hickson has determined to be a "historical statement" from His Grace, Bishop Athanasius Schneider has vocally identified what many - including myself - have judged to be the origin of the Pachamama Affair that characterized the Amazonian Synod:

“Unfortunately,” Schneider comments, “Pope Francis defends the veneration of these Pachamama idols, in saying there were no idolatrous intentions in using them.” Here, Bishop Schneider objects that “we can only see the exterior acts,” not the “hearts of the people.” And these acts “were clearly acts of religious cult – bowing, revering, and even prayers towards a wooden statue” which is, “even the Pope said it, it is Pachamama.” And this is, according to Schneider, a “concept of a kind of a goddess” in the “entire culture of the indigenous South American people.”
The evil, Bishop Schneider explains, “wants to reach always its culmination.” The evil is to deny that there is “one truth,” he explains; and  relativism is therefore “like a virus.” “When you don't resist it, it will by time conquer the entire body,” Schneider explains more and then refers back to the Second Vatican Council. This “doctrinal relativism, doctrinal ambiguity” he states, can already be found “partly in some expressions of the Second Vatican Council.”

You can read the full article here.

In the interest of giving all the benefit of the citation, we are also including the interview betweem Michael Matt and His Grace, which is where these particular sentiments were shared.


May His Grace continue to be the shining beacon we Faithful Catholics so ardently pine for.
Posted by Irenaeus at 15:57

Email ThisBlogThis!Share to TwitterShare to FacebookShare to Pinterest
Labels: Crisis in the Church, Vatican II

We thank God for Bishop Athanasius Schneider and for his *historic statement*.

As we thank the Lord for all our faithful priests and nuns, and for those members of the hierarchy who have been moved by the Holy Spirit to witness to the truth of the Catholic faith in these evil times ... Cardinal Burke, Cardinal Cordileone, Archbishop Vigano, and even the more diplomatic Bishop Robert Barron.

The laity can fire off invective on social media, but it makes no difference to the betrayal of Catholic doctrine we see all around us, or to the moral and financial sleaze of the American hierarchy, or to the evil that wears the mask of virtue in the case of Fr. James Martin.

Only the priest has the sacerdotal authority that distinguishes him from the laity. This can never change until the return in glory of our Great High Priest in Heaven.

When in the last 300 years have the laity criticised the pope and hierarchy in such bold terms as we are seeing today?
Why? Why is this happening?

No one is doing this because they want to make trouble, or to create hurt and offence; or because they are clamouring for a share of the power, spiritual power that ONLY lies with our shepherds, with the high office of the Church.

What we are hearing is a cry from the heart, *Return Christ's Church to us; break the hold of those errant bishops and priests, who neither believe in Catholic doctrine nor practise Catholic holiness.*

Bishop Schneider is acting *contra mundi* true to his Christian name.
He is saying what Archbishop Marcel Lefebvre would be saying if he were here on earth and not in Heaven.

Bishop Schneider is ready to fight the good fight and bring down the fury of the media on his head, as are all the bishops and priests who have not forgotten the Catholic faith, the faith that is handed down to every priest at his ordination.
A priesthood that can only ever be male.

We pray that the sinful hierarchy will repent of their ways.

Satan wants Christians within his power more than any other people.
If we have been turned from the power of Satan, be sure that Satan will try to recover his prey.

This is why Satan's first line of attack is always the priesthood.
Saint John Vianney the Cure d'Ars, recognised this.
And yet the Modernist head of the Jesuit order says Satan does not exist!!!

*He saved us, not because of the righteous things we had done, but because of his mercy. He washed away our sins, giving us a new birth and new life through the Holy Spirit.*
Titus 3:5

Letter of St. Athanasius to his flock. Catholic Church Ravaged in the Fourth Century.

On YouTube, a Fransciscan priest preached on the theological and historical context of the lonely stance that Athanasius took:
*May 02 Homily: Athanasius Contra Mundum. 2 May 2013. Franciscan Friars.*

As this unnamed Irish priest said, *The world woke up one day and found it was Arian.*

Will Toronto's misguided Catholic teachers, supporting Gender Ideology and LGBTQ, wake up one day and find Canada is no longer Catholic?

And will they have to accept that they opened the door to apostasy, to that *blackness of darkness* that is life without the Gospel?