Do 'really good kids' sodomize another with a broom?

Readers of TCW may remember Barona's report this past November of seven students at St. Mike's College School here in Toronto arrested after a video surfaced of them sodomizing another student with a broom.

Well, we finally have an update on the case, courtesy of CBC News. However, there is one item I would like to draw your attention to.

Rachel Lichtman is representing one of the teens accused of the broom-sodomizing. When asked about the characters of the teens who were arrested, Lichtman said, "They're really good kids. They made mistakes, and they're taking responsibility for those mistakes."

Do "really good kids" pull down another boy's pants, and proceed to shove a broom handle up his anus on more than one occasion?

Do "really good kids" hold the same boy down and proceed to rip at his clothing, to the point where they rip apart his underwear?

Do "really good kids" laugh and jeer as this is going on?

Do "really good kids" film this?

Malice that they proceeded to take out on an innocent boy. In a school which purportedly teaches its students "goodness, discipline and knowledge." Well, the first two were clearly not in any supply in that locker room. It makes me wonder what that school actually teaches.

Ms. Lichtman, you might want to consider your choice of words in the future, for they offend not only members of the general public, but also the victim who is so often forgotten in cases as these. 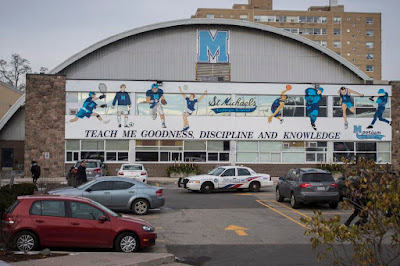 YouTube.
Preparing Children for the anti-Christ and the Power of the Rosary.
12 October 2019. What Catholics Believe.
Tom in discussion with Father William Jenkins.

How the post-Vatican II Church was not in a strong position to challenge, and present an alternative to, the sexual revolution; and why the post-Conciliar Church let down the young, like the boys in this post...

Listen on YouTube:
The Crisis in the Catholic Church and our Lady of Buen Suceso.
Vox Catholica. 3 May 2018.
Father Anthony Purdy of the Society of Pius X.