Where were we on Good Friday?

In two short weeks, the black, black day that was Good Friday will be re-presented in Catholic churches around the globe.

We will once again hear the Passio according to St. John the Evangelist, and have in our minds the events of that awful day in vivid detail. The day we - as a human race - killed God due to our own selfishness and obstinate attachment to sin.

God did not have to offer Himself up for our selfishness and obstinate attachment to sin. But He did so anyway. For that is how much He loved us.

When I was involved with the Novus Ordo, the local parish would offer a service on Good Friday - separate from the one at 3pm - where the Stations of the Cross would be acted out for all to see. Say what one will about that, but something which tended to strike at me was how the shouts of "Crucify Him! Crucify Him!" came from the very back of the church. Not from the front. From the back.

It was almost as if that was done to remind us that, far from being passive observers of the drama unfolding before us, we too were (to use a common Novus Ordo term) active participants in the events of that pitch-black day, for those words would wash over our ears to the front.

So, I ask, where were we on Good Friday?

Were we the holy women of Jerusalem wailing and mourning for Our Lord, standing close to the Cross?

Were we the Blessed Virgin, standing, praying, crying at the foot of the Cross as Our Lord's life slowly ebbed away?

Were we the Beloved Disciple - the only disciple who eventually came back to be at Our Lord's side, though he was not there at the beginning of the Crucifixion - who took the Blessed Virgin into his home while he stood with her at the foot of the Cross?

Were we the Roman soldiers casting lots for Our Lord's clothing, standing just a bit further away from the Cross than the women?

Were we the silent members of the crowd, standing at a distance quite removed from the drama unfolding before them, saying and doing nothing to relieve Our Lord's suffering?

Were we the loud and vocal members of the crowd, standing quite close to the Cross, spitting, jeering, cheering, cursing at Our Lord and otherwise making His Wounds throb, sting, and become more painful with each insult?

Or were we in the city of Jerusalem, physically removed from the events happening at Calvary, carrying on with our day, ignorant (or willfully dismissive) of the Deicide happening just a few miles away from us? 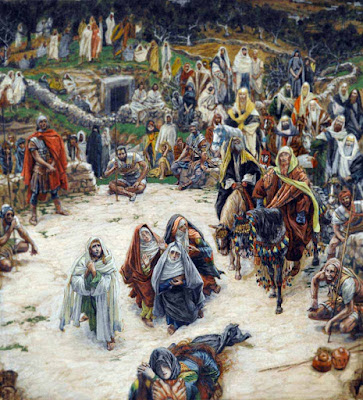 Email ThisBlogThis!Share to TwitterShare to FacebookShare to Pinterest
Labels: Catholic