Is charity becoming a forgotten virtue?

Is charity dead amongst those faithful adherents to the traditional Mass?

Perusing Twitter this morning, I came across this grossly insensitive and inaccurate tweet, since deleted, authored by someone ironically named "Catholic Doors." 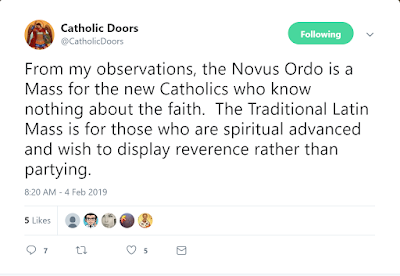 I do not think I need to detail why this tweet is egregious. But in case there are those reading this little post who think the same way as this individual in Saskatoon does, allow me to spell it out.

While I would agree with this individual's implication that the TLM is superior - for the mere fact that it is fuller than the Novus Ordo in many respects - I can only argue so from a material point of view. I would never dare to say - or imply - that those who attend the TLM are in some mysterious way more "spirtual[ly] advanced" than those who attend the Novus Ordo. That would indicate an awareness of knowledge I am not allowed to know.

I used to. I do not do so anymore. To say such a thing - as I learned from hard experience - is at once elitist, prideful, and presumptive. It is the devil made manifest in our words - this is precisely what his attitude was as he dared to sit on God's Throne at the beginning of his rebellion eons ago.

It is also historically inaccurate to suggest that the TLM is a sure guarantee to one's spiritual advancement. In their rush to tweet, Catholic Doors seemed to forget that the TLM did not share the same space as the Novus Ordo for over 1,960 years. Many people who attended the TLM as we know it now likely went to Hell, and those who attend the TLM now are just as likely to find themselves in Hell when their time is up.

The Devil does not care where you go to Mass. He will still work to take you down and separate you from God. He hates you that much. And he loves it when you make his job easier. Less work for him, right?

Presumption of one's salvation is a sin against the Holy Ghost.

Why do we have the spiritual classics, which speak about union with God through prayer often and were written as instruction books, if the TLM was for spiritually advanced people? Why do we have The Soul of the Apostolate, for example, written in a time when the TLM was the only Mass around in the Roman Rite?

Has charity become a forgotten virtue? It seems so for Catholic Doors. Has it also become that way for us? Have we, adherents to the Old Mass, forgotten that very same grace which led our Lord to give up His Life for us on the Cross, which is represented at each Mass we assist at - charity?

Perhaps it's time we examine how we approach the Mass, at a deep spiritual level. At the very least, we need to nip the sentiment that just because one attends the TLM, they are automatically better off than one who attends the Novus Ordo, right in the bud. I speak as someone who used to think along such a line of thinking.
Posted by Irenaeus at 13:21

This is gnosticism. These are the neo-Pharisees. These sad, angry people are doing the devil's work, and playing right into the hands of those who hate not only the Tridentine Liturgy, but also the older Eastern Rites.

These people are judging the interior life, the soul, of which ONLY Christ can judge.

It's sad, really, to see this nonsense going. Yet, people often accuse the Novus Ordo of propagating gnosticism and neo-Pharisicism, failing to realize that they do the same thing. The devil can truly blind us.