Have militant homosexuals taken over the Jesuits? 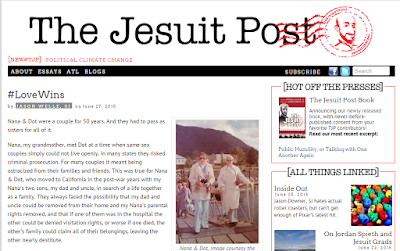 The Jesuit Post, a publication of "America Media" - A Jesuit Ministry, claims to offer a "Jesuit, Catholic perspective on the contemporary world". It is mostly operated by Jesuit scholastics who are on the way to ordination. The Jesuit Post is riddled with pro-homosexual propaganda.

One such Jesuit, is the editor of the Jesuit Post, Jason Welle. S.J., who is a few months away from ordination to the priesthood. Welle wrote an article for the Jesuit Post entitled "Love Wins". Welle rejoices in the recent ruling by the U.S. Supreme court and leaves us with this perspective of the morality of homosexual activity:

I know there will continue to be objections from those who believe that gay and lesbian relationships are immoral or that same-sex marriage can simply not be recognized as proper marriages, fellow Catholics and other Americans of good will among them".


Such an incredible remark, coming from a man who intends to be ordained a Catholic priest, is simply unbelievable. How is this possible? And yet, there it is, before us. Open dissent against Christ and His Church.

How can any bishop consider him for ordination? Does, or do the ordaining bishops know of the dissent amongst the Jesuits? Do they care? Do some bishops also agree that there is nothing wrong with homosexual activity?

One can ask: has the Jesuit Order been infiltrated by homosexuals? If so, are they all dissenters on sexual morality, are any of them activity practicing homosexuality?

How many other Jesuits, like Jason Welle S.J., are there who also believe that homosexual activity is not immoral? And this then leads us to the inevitable question: has the Vatican itself been infiltrated by militant homosexuals?
Posted by Barona at 07:11

I note at the article that Father James Martin, S.J. commented that it was "beautiful."

I recall having a conversation some years back with Fr. Joseph Fessio, SJ about the Jesuits, and asked him if he was one of the good Jesuits, faithful to the Church. He said, yes, and that there were so few of them. There are good, faithful Jesuits here and there. Fr. Mitch Pacwa is another one. The order was suppressed at one time. Looks like when we get the next good Pope, maybe they will be again.

Do you know the reason that Jason Welle was not ordained? Deo Gratias! Will keep praying!