By now we should begin to wonder why Pope Francis keeps going outside the normal avenues of communication. I believe he is well aware that the men who swirl through the corridors of Vatican City are not to be trusted. Remember, the vast majority remain from the Pontificate of Pope Benedict; and we know how they undermined that Pope.

Also consider those vast documents on the table last Spring when the two men met for the first time since the election of Pope Francis. The "Pervert" Dossier weighed heavily on Benedict and it no doubt weighs heavily on Francis. Hence the sensational announcement from the Pope on the number of 8000 clergy (including bishops and cardinals) being child molesters. That, no doubt, is just the tip of the iceberg: if 2% are (and convicted cases have always been in the vast majority of cases molestations of boys) of children; what about the numbers for youth, teenage boys - what about the clergy who are violating their vow of chastity with other men (and women)?

Shocking as these thoughts are, perhaps more shocking is the need for the Pope to go to the press with such news. But the reaction of the Vatican News Agency of Fr. Lombardi and Co. proves the Pope's point: he must go to the press, the people, because these men are involved in a massive culture of denial and cover-up. The Pope himself alluded to these cover-up artists in the interview. These men are not dealing with the gentle Pope Benedict. They are dealing with a man who has used a bull-horn outside the Cathedral in Buenos Aires berating evil-doers. Will Pope Francis eventually have to resort to such tactics to get his message out?

Pray for Pope Francis. It is not too far fetched to consider that his life may well be in danger. A Pope who goes too "far" in whistle-blowing the strangle-hold by the "gay mafia" may well end up their victim; and therefore a martyr.

The following image - tweeted by Fr. Thomas Rosica - is indicative of the effort undertaken by Vatican officialdom to twist, deny and distort the Pope's words and actions. In other words, we are to believe Fr. Lombardi and not Pope Francis. Lombardi and Co. would have us believe that Mr. Scalfari is a liar. Yet, Pope Francis has seen fit to approach this man for the third time, obviously a sign of trust in the man. 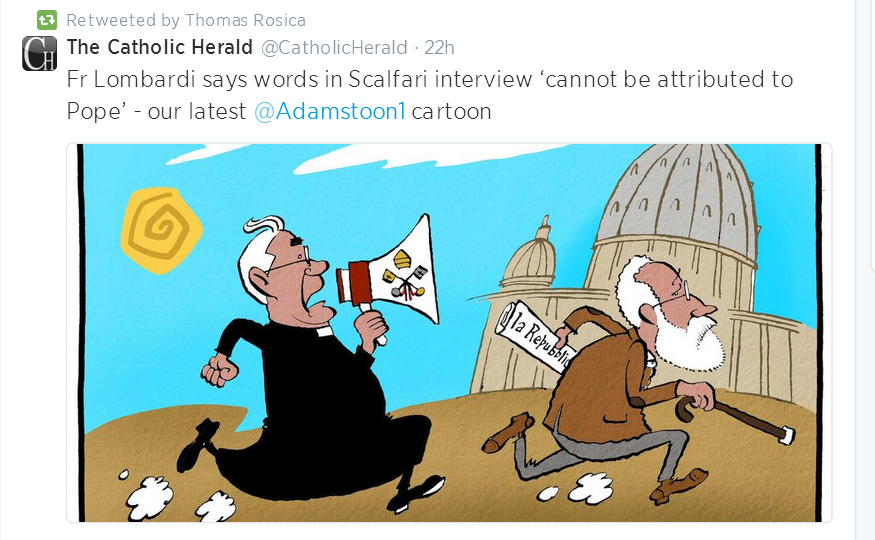 Very good post... wish I had thought of it.

Look at the games these manipulators are playing:

The question needs to be asked, why does this Bishop of Rome feel it necessary to engage secular media in this way?

If he wants to tell us something, stand at the window of the apartment on Sunday and say it?

I for one am fed up with all of them.